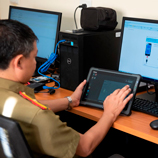 UNODC collaborated closely with the Lao Police Force in setting up the facility, funded by the Government of Norway. UNODC conducted a rigorous selection process and trained and mentored specialist Lao Police Force personnel and, together with the Police Force, identified a suitable location for the lab. The lab is equipped with cutting-edge technology for the identification, extraction and analysis of digital evidence within a broad human-rights framework.

With the establishment of this facility, investigators in the country will be able to ensure the overall integrity and reliability of digital evidence whilst maintaining a proper chain-of-custody. Investigators are now able to identify, transport, recover, analyse and preserve digital evidence resulting from criminal cases and present this evidence in court. This new capability will drive Laos' criminal justice process forward, strengthening the rule of law in the country.

UNODC has been engaging with Laos for the past two years and has delivered training and mentoring to address the technical and legal challenges posed by new technologies and devices. This has helped investigators to understand the standard operating procedures for securing and handling digital evidence and follow best practices for cyber investigations and digital forensics examinations.

As a direct result, investigators are also able to combine digital forensics skillsets with traditional investigative methodology, reflecting a multidisciplinary approach. Along with the establishment of the lab, UNODC has also equipped the Laos Police Force with Standard Operating Procedures for handling the digital evidence and established forensically sound processes for identifying, handling, analysing, storing and presenting digital evidence in court.

"The establishment of a specialized lab to analyse digital evidence in the Laos Police Force, the first of its kind in the country, is a major step forward for the criminal justice authorities, as well as for the Lao PDR society as a whole", said Alexandru Caciuloiu, UNODC Cybercrime and Cryptocurrencies Advisor for Southeast Asia and Pacific.

He added that "Citizens will benefit from a criminal justice system that operates according to the latest international standards and makes use of the latest technologies to ensure that justice is served in a fair and transparent way, thus taking Laos one step further to achieving the UN Sustainable Development Goal 16 on providing access to justice for all and building effective, accountable and inclusive institutions at all levels."

With the help of the lab, the Laos Police Force will now be able to analyse digital media for over 2,000 criminal cases per year, thereby delivering real, measurable strategic change. The UNODC Global Programme on Cybercrime is committed to combating cybercrime and working with national and regional partners, particularly through ASEAN-based mechanisms.

The Lab was inaugurated in the Forensics Police Department, Ministry of Public Security, where UNODC briefed the Heads of Units and advised the Government. "Due to the recent increase in cybercrime, which threatens the stability, security and peace of countries in the region and across the globe, there is a need for continuous efforts and improvements in all areas of capacity building and in the utilization of advanced technology in combatting, investigating and prosecuting criminal activities", said Police Colonel Dr. Phengsavanh Thiphavongxay, Deputy Director General, General Police Department, Ministry of Public Security, Lao PDR.