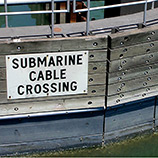 7 February 2019 - While many believe that the majority of global telecommunications, including the internet, is transmitted through satellite, the reality is that over 95% of such communication occurs through fibre-optic cables.  The bulk of these cables, on which we are so critically reliant, are merely the size of a garden hose and are just lying, unguarded, on the sea floor.

It is estimated that roughly US$ 10 trillion - approximately four times the GDP of the United Kingdom, twice the GDP of Japan and more than the GDP of India - of economic activity moves through submarine cables every day.  Given the dependence of states on such cables, for everything from personnel management to communication to fiscal matters to military and security operations, it is also a surprise to many that almost all of the global network of submarine cables is privately owned and maintained.

Recognizing the potential for intentional or non-intentional interference with this maritime infrastructure, and responding to the UN General Assembly's 11 December 2018 Resolution to increase "dialogue and cooperation among States and the relevant regional and global organizations through workshops and seminars on the protection and maintenance of fibre-optic submarine cables to promote the security of such critical communications infrastructure," the United Nations Office on Drugs and Crime's (UNODC) Global Maritime Crime Programme (GMCP) held an expert meeting with participants from 28 states in Colombo, Sri Lanka on 30 January 2019 to map the public international law regime concerning submarine cables.

After highlighting the global significance of fibre-optic submarine cables, a review of the relatively limited treatment of them in international law sparked a productive discussion on how to both implement the law that exists and explore mechanisms for resolving important gaps and ambiguities related to protecting such cables.

A number of recommended follow-up activities were identified. These included designating submarine cables as critical communications infrastructure and/or critical national infrastructure, assigning a lead agency for protection of submarine cables, and developing national action plans to enhance resilience to interference with cables.

It was also deemed necessary to support national and international legislation to criminalize both wilful damage to cables or damage caused by gross negligence, and to explore regional approaches to securing cables.

Alan Cole, Head of the Global Maritime Crime Programme, noted that the countries most concerned about this issue are the ones that rely on one or two cables to run their normal daily operations, since damage to these would represent a complete country shutdown for several days or even weeks. He also committed to producing an Annex to the second edition of the UNODC Maritime Law Enforcement Manual that more extensively maps the relevant public international law concerning submarine cables and indicated a willingness to support states and regions in taking forward some of the recommendations from the event.

The Government of Sri Lanka has since invited UNODC to participate in a regional workshop in March to follow-up on this meeting.