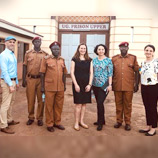 2 July 2019 - Uganda will become the third beneficiary country of the joint global programme on "Supporting the management of violent extremist prisoners and the prevention of radicalization to violence in prisons", in addition to Kazakhstan and Tunisia.

The threat of violent extremism in prisons is of increasing concern to the international community and one which presents many technical challenges to Member States to effectively address.

This global initiative aims to support select beneficiary countries to strengthen capacity of prison services to effectively manage violent extremist prisoners and to respond to the challenge of potential radicalization to violence in various prison settings.

It aims at addressing these issues as part of broader prison reform efforts and in full compliance with international human rights standards, including the United Nations Standard Minimum Rules for the Treatment of Prisoners (the Nelson Mandela Rules) and from a gender perspective.

Uganda's agreement to be designated as the third beneficiary country of this joint initiative followed consultations with a broad range of Ugandan officials and stakeholders, including civil society.

Vera Tkachenko, Crime Prevention and Criminal Justice Officer who is coordinating the joint programme for UNODC, said that "UN implementing partners thank the Government of Uganda for the long-standing partnership and commend the important efforts already made to address the issue of preventing violent extremism and terrorism in the country. The UN looks forward to continuing and expanding its partnership with Uganda to address the complex challenge of preventing violent extremism in the prison settings."

The programme is co-funded by the European Union, the United Nations Office of Counter-Terrorism and the Netherlands.