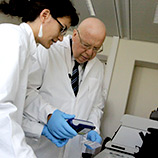 Vienna, 3 July 2019 - The United Nations Office on Drugs and Crime (UNODC) Laboratory, which provides scientific and forensic services to almost 300 labs in 80 countries, is celebrating its 40-year presence at the UN Headquarters in Vienna. On the occasion of this anniversary the laboratory had been refurbished and the revamped lab was officially inaugurated today by UNODC Executive Director Yury Fedotov.

From its laboratory in Vienna UNODC provides guidance to Member States that allows them to increase the quality of forensic services, thus helping bring criminals to justice and exonerate the innocent. Over the past decade the UNODC Laboratory and Scientific Section also provided thousands of field test kits to safely handle and identify drugs even in the most remote locations around the world.

During the inauguration of the refurbished lab, Mr. Fedotov said that "this laboratory is unique within the UN system, and it lies at the heart of UNODC support to Member States to address the world drug problem". He noted that since drug types are constantly shifting and evolving, it is imperative to keep up and offer state-of-the-art scientific and forensic services. "With the upgrades to this lab, including the UN drugs library, expanded training facilities and equipment, we will be able to extend this assistance even further," he said.

The laboratory, which was originally established to carry out scientific research on opium, cannabis and other substances under international control, now ensures worldwide availability and accessibility of internationally accepted standards for forensic best practices. It also improves national forensic capacity and capabilities to meet internationally accepted standards of performance, and promotes the use of scientific and forensic data in strategic operations, policy and decision-making processes.

Justice Tettey, Chief of the Laboratory and Scientific Section, noted that through the laboratory, UNODC "has not only restored the vision of the General Assembly in supporting countries to deal with the drug problem, but gone further in helping to identify emerging threats and support countries in a timely manner to reduce the negative impact of these threats in line with the 2030 Agenda for Sustainable Development."

The laboratory, established by the General Assembly in 1954 as the United Nations Narcotics Laboratory, was based in Geneva until 1979.