Japan pledges over US$ 25 million to support UNODC's activities against terrorism, organized crime and the world drug problem 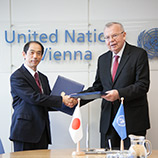 27 March 2019 - The Executive Director of the United Nations Office on Drugs and Crime (UNODC), Yury Fedotov, and the Permanent Representative of Japan to the United Nations in Vienna, Mitsuru Kitano, today exchanged funding agreements worth US$ 25.4 million. The agreements support key UNODC projects for the fiscal year 2019-2020, including on counter-narcotic efforts in Afghanistan and on fighting terrorism and violent extremism.

Mr. Fedotov thanked Japan for its generous contribution, including towards UNODC's activities against terrorism: "Working closely with Japan, UNODC will continue to provide specialised expertise and legal and technical assistance to help countries prevent and fight terrorism and violent extremism," he said.

Mr. Kitano emphasized that Japan's contribution "shows the high value of UNODC's past achievements and the expectation to further develop the Japan-UNODC cooperation."

Next to the pledge on Japan's supplementary contribution, an agreement was also signed for funding of over US$ 153,000 provided by Japan's Drug Abuse Prevention Centre (DAPC).

UNODC and DAPC have been cooperating for over two decades, and DAPC has been leading an innovative fundraising campaign which involves schools and youth, private sector and civil society at large for over 20 years. Previous funds raised by the Centre have been used to support the activities of almost 700 grassroots NGOs in some 90 developing countries in Asia, Africa, Latin America and the Caribbean, and Eastern Europe.

"The DAPC-UNODC cooperation sets an effective example of an NGO helping other NGOs, and of young people promoting drug use prevention and youth empowerment," said Mr Fedotov.

At the end of the signing ceremony, Mr. Fedotov presented to Mr. Kitano the report of the activities funded by the DAPC 2018 contribution. He also reaffirmed UNODC's firm commitment to support Japan to ensure successful preparations of the 14 th UN Crime Congress in 2020, hosted by Japan in Kyoto.