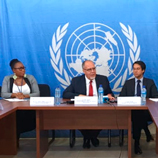 The announcement was made by the UNODC Regional Representative for West and Central Africa, Pierre Lapaque, during a visit to the Central African Republic from 19 to 22 February. He said that "urgent action is needed to maintain the momentum created by the recently concluded peace agreement" because "we cannot build a State and a nation without effective, transparent and accessible justice for all."

The UNODC office in Bangui opened in June 2018 following the signing of an agreement with the United Nations Multidimensional Integrated Stabilization Mission in the Central African Republic (MINUSCA). This partnership between UNODC and MINUSCA aims to support the operationalization of the Special Criminal Court (SCC) in the Central African Republic.

The SCC was established by law in 2015 as a national court to judge cases of serious violations of human rights and international humanitarian law committed in the Central African Republic territory since 1 January 2003. In this context, UNODC's mandate is more specifically to assist the SCC in the development of its legal aid and victim and witness protection services.

During his visit to the Central African Republic, the UNODC Regional Representative also met with national authorities interested in UNODC'S mandate, including the Prime Minister, and ministers of the Interior, Justice, Mines and Water and Forestry. These exchanges show a strong political will to collaborate with UNODC to combat serious crimes such as corruption, trafficking in natural resources, firearms, money-laundering, among others, that hinder peace, stability and development in the country.

The opening of the project office in the Central African Republic and UNODC's various activities in the country contribute to the development of a Regional Strategy that UNODC aims to implement in Central Africa to better respond to the interconnected challenges posed by transnational organized crime on the African continent.

It also contributes to the achievement of the Sustainable Development Goals, in particular Goal 16 on promoting peace, justice and transparent and effective institutions.