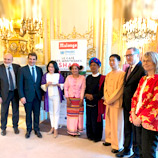 The product is the result of a partnership between Malongo and farmers from the Green Gold cooperative, which participates in the UNODC Alternative Development Programme. This programme seeks to establish sustainable livelihood alternatives for opium growing communities by enabling farmers to independently cultivate, refine and commercialize high quality coffee that can be exported to competitive international markets.

"We have seen that alternative development can bring peace to the programme areas by helping communities cope with the causes and consequences of conflict," said Miwa Kato, Director of UNODC's Division for Operations at the launch event in Paris. "Through providing livelihood opportunities outside the illicit crop economy, the projects remove an important source of financing for criminal groups," she added.

Farmers who grow illicit drug crops are concentrated in poor and isolated areas and are usually unable to obtain sufficient income from legal activities due to lack of markets, conflict, lack of access to land and absence of basic infrastructure. Alternative development has been one of the most successful approaches to providing these farmers with more stable and legal livelihoods.

The Green Gold Cooperative began its partnership with Malongo to bring alternative development coffee to market in 2017. Under this five-year agreement, Malongo will buy up to 600 tons of coffee per year from more than one thousand beneficiary farmers.

"Malongo is a private company, our involvement in such a project is not about charity or helping coffee producers, it is about business. But we want to set up another kind of business where the added value is shared between the actors of the supply chain, where producers can live with dignity from their work, where consumers are faithful and satisfied with the quality," said Jean-Pierre Blanc, Director General of Malongo Coffee Company.

Among the socio-economic impacts of the Alternative Development Programme is the empowerment of women. They participate as farmers, village level committee members and representatives in the governing bodies of Green Gold and are enabled to improve the overall social situation of the entire family.

As one of the farmers, Ms. Moe Du from Lon Hay village recently said: "I am happy now that I am growing a legal crop peacefully and making money at the same time. I want to make a lot of money, so that I can provide for my children's education."

UNODC's Alternative Development Programme in co-financed by two main donors, Finland and Germany, and receives additional support of Switzerland, that is giving resources directly to the Cooperative.