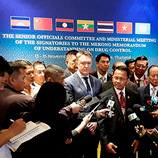 Bangkok (Thailand), 15 November 2019 - Ministers and senior officials from countries of the Mekong Memorandum of Understanding (MOU) on Drug Control - Cambodia, China, Laos, Myanmar, Thailand and Viet Nam - and the United Nations Office on Drugs and Crime (UNODC) have concluded two days of discussions and negotiations on a new political agreement and plan to address the deteriorating drug situation.

The meeting was arranged following recurring reports of significant increases in the production, trafficking and use of illicit drugs and precursor chemicals across the Mekong, and confirmation that major transnational organized crime syndicates have migrated operations into the Golden Triangle. The borders of Myanmar, Thailand and Laos have been associated with drug production and trafficking for several decades, but the levels of synthetic drugs, in particular of methamphetamine (meth), being traced back to the area, are unprecedented.

Record tablet and crystal meth seizures were made across the Mekong in 2018 while prices declined to levels last seen 20 years ago, indicating extremely high levels of availability.

"The continuing scale-up of synthetic drug trafficking in the Mekong is not simply a crisis for the region itself, but it is now an international problem […] the organized crime syndicates behind the trade have demonstrated they can maintain production even if labs are seized, and that new precursors can be used when others are unavailable", noted UNODC Regional Representative for Southeast Asia and the Pacific, Jeremy Douglas. "We are concerned that they will diversify further to synthetic opioids like fentanyl. With all its capacity North America was not ready, and Asia certainly is not."

He added that Governments have for years focused on reducing supply, often targeting street sales while organized crime got a pass, and we see now that continuing this approach has little to no impact. "The region has desperately needed to rethink how it is dealing with the problem, and we are pleased Mekong countries are today agreeing to emphasize dampening market demand through preventive education and addressing health, harms and social consequences, by increasing cross-border operations, joint training and justice cooperation, and continuing to support impoverished opium farmers in Myanmar and Laos to transition away from the drug economy, said Mr Douglas."

The surge in synthetic drug production and trafficking has also resulted in an increase in the amount of money to be laundered. Recent estimates have valued the regional meth market at up to $US 61.4 billion per year and the heroin market at up to $US 10.3 billion, and organized crime syndicates have been seeking and using new and innovative ways to launder increasing profits, including through the growing regional casino industry. "We have not prioritised the laundering of drug money in the past, and organized crime have exploited gaps in our ability to investigate and respond", said Thailand's Justice Minister Somsak Thepsuthin. "We have had a good candid discussion about proceeds of drug trafficking and how to address the problem, and are looking to UNODC to examine how and where the money is going."

"Thailand's law enforcement agencies have had some success in recent years, but national efforts alone are clearly not enough," said Thailand's Deputy Prime Minister Wissanu Krea-ngam. "Organized crime take advantage of gaps and vulnerabilities that result because of uneven law enforcement capacity and coordination problems. The Mekong MOU helps by providing a framework through which we can deliver a more coherent regional approach."

A preparatory meeting of intelligence and border law enforcement officials was held prior to Mekong MOU negotiations to formulate a strategy to increase cross-border investigations and operations through border liaison offices (BLOs). Ministers approved the strategy, agreeing to report results in mid-2020.

UNODC Regional Programme for Southeast Asia and the Pacific

Drug Control in the Mekong Region