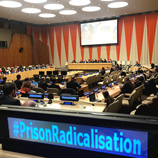 New York (USA), 19 November 2019 - The United Nations Office on Drugs and Crime (UNODC), together with Belgium and Indonesia co-organized the first ever Security Council Open Arria-formula meeting on "Challenges of Radicalization in Prisons" on 12 November in New York.

The meeting provided Member States with a platform to address issues related to the management of detainees convicted for terrorist offences, as well as violent extremist prisoners, the prevention of radicalization to violence in prisons as well as rehabilitation and reintegration of detainees within society. Member States also discussed lessons learned, best practices and persisting challenges in dealing with prison radicalization and the prevention of violent extremism conducive to terrorism in a prison setting.

Throughout the meeting, panelists and speakers said that standalone intervention programmes are less likely to be successful in the absence of broader efforts to ensure effective management of all prisoners. Participants agreed that efforts should include implementing appropriate security measures, intelligence systems and control systems, as well as cooperation with other law-enforcement and criminal-justice agencies, specialized staff, faith professionals, therapists, mentors, and families.

UNODC stated that "poor conditions, overcrowding, under-staffing, insufficient prison staff training and a lack of programming all heavily undermine the capacity of prison and correctional administrations to effectively manage violent extremist prisoners. Worse yet, these deficiencies may provide powerful entry points for radicalization efforts - facilitated by a general sense of despair and frustration amongst the general prison population".

UNODC provided a series of detailed recommendations for Council consideration and action, and highlighted the continued relevance of the UN Standard Minimum Rules for the Treatment of Prisoners (the Nelson Mandela Rules) in our efforts to prevent and counter violent extremism in prisons. UNODC also noted that the Nelson Mandela Rules, for which UNODC acts as custodian, provide the universally recognized blueprint for good prison management and the treatment of all prisoners, including violent extremists or those vulnerable to radicalization.

This marks the third Arria Formula co-organized by UNODC this year, including one on transnational organized crime in the Caribbean on 7 July and one on trafficking in persons for sexual exploitation in conflict situations on 25 October.

An Arria Formula meeting is an informal arrangement that allows the Security Council greater flexibility to be briefed about international peace and security issues. It has been used frequently and assumed growing importance. The meeting is called for the purpose of a briefing given by one or more persons, considered as expert in a matter of concern to the Council. The formula is named for Ambassador Diego Arria of Venezuela who devised it in March 1992. The first ever Arria Formula co-organized by UNODC was held in July 2007 (on trafficking in persons) with the work of UNODC increasingly featured in the Security Council in ensuing years.