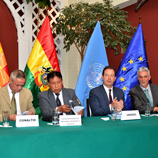 La Paz (Bolivia), 28 January 2020 - UNODC Representative in Bolivia, Thierry Rostan, presented today the report on the incineration and destruction of illegal drugs confiscated in the country in 2019.

According to the report, the Bolivian authorities seized 9,153 kg of cocaine base, 6,404 kg of cocaine hydrochloride and 6,200 kg of marijuana for sale.

Acknowledging the steps taken by the Public Prosecutor's Office and the Anti-Narcotics Bolivian Police, Mr. Rostan said that the authorities carried out the destruction in full compliance with international standards, national protocols, and transparency.

UNODC validates the incineration / destruction of illegal drugs in Bolivia within the framework of its Programme to Support the Implementation of the National Action Plan to Combat Drug Trafficking and to Reduce surpluses of Coca Crops, a program funded by the European Union.

The report recommended, among others, the increase in the protection of the border posts of the country, strengthen interdiction in the departments of Santa Cruz, Cochabamba and La Paz, in which the largest amount of controlled substances was found, and to intensify the synthetic drugs control.