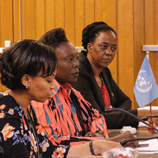 Addis Ababa (Ethiopia), 4 March 2020 - Addis Ababa is the home of Ethiopian Airlines, Africa's largest carrier which serves over 120 cities around the world from Bole International Airport. The airport handles hundreds of flights daily, but unfortunately, it has also contributed to Ethiopia becoming a destination and transit country for illegal drugs. Against this background, UNODC and the Ministry of Health of Ethiopia recently organized a workshop on the 'National Implementation of Drug Policy Commitments', which was attended, among others, by high level representatives from the Government of Ethiopia, the UN Resident Coordinators Office and the African Union Commission on Social Affairs.

With approximately 22 million passengers a year arriving at Bole International Airport in Addis Ababa, and with travellers carrying at least two pieces of luggage per person, the Federal Police Commission presented the challenges of inspecting approximately 44 million pieces of luggage for illicit drugs.  On a daily basis, that would be over 120,000 luggage inspections.  Commander Mengisteab Beyene, Deputy Director, Counter Narcotics Operation stated that the severity and complexity of the drug situation at the airport was increasing and that it had become popular as a transit point along drug-trafficking routes and a destination country for illegal drugs.  Between 2018-2019, 80 individuals from 17 countries were arrested for trafficking cocaine, heroin, and cannabis.

At the opening of the event, Dr. Lia Tadesse, State Minister of Health, delivered a clear message: "No public or private institution should be exempted from engaging in interventions that tackle the challenge of illicit drugs and drug abuse".  She further added that the production, wide distribution and use of illicit drugs is a global challenge with far-reaching effects on the social, economic, and health of societies and one that had to tackled.

Representing the UN in Ethiopia, the UN Resident and Humanitarian Coordinator, Dr. Catherine Sozi,reminded participants that the heads of the UN agencies had come together in March 2019 to forge a common position on the global drug policy in order to advance security, development and human rights. Drawing from personal experience, Dr. Sozi said that the impact of the drug problem is devastating at individual, community and national levels. 'We are in the 'Decade of Action' and must put the dignity, health and rights of people and planet at the centre of sustainable development", she said.

Over 40 participants from federal, regional, international, civil society and non-governmental organizations who have a mandate related to dealing with illicit drugs and substance abuse related issues attended the workshop.  Also attending was the International Narcotics and Law/Colombo Plan Drug Advisory Program official and other senior government officials from the Ethiopian Food and Drug Administration and the HIV/AIDS Prevention and Control Office.

Dr. Jane Marie Ong'olo, Head of Division of Social Welfare, Vulnerable Groups and Drug Control and Crime Prevention of the African Union Commission, stated that the African Union Commission on Social Affairs advocates for evidence-based responses to the health and social harms related to drugs. "To sustainably build the Africa we want, we must move beyond a catalogue of good intentions, and collectively step up responses to cope with drug challenges with practical measures to allocate appropriate funding for drug control programmes nationally."

UNODC Representative a.i., Margaret Akullo acknowledged that no country can address the complex issue of illicit drug and drug abuse alone and so the collaboration with the Government, the UN and the African Union at this event was significant and has paved the way to continuing addressing the global problem in a much more comprehensive manner.

At the end of the workshop, a National Multisectoral Drug Technical Working Group was established and will be led by the Ethiopian Food and Drug Administration (EFDA).