" Migration is a phenomenon that touches upon every country, either as a place of origin, transit or destination, or as a combination of these. ... Migration can be a positive and empowering experience for migrants themselves, and for both the home and host societies. But for too many migrants, the reality is discrimination, exploitation and abuse."   UN Secretary-General, 18 December 2009 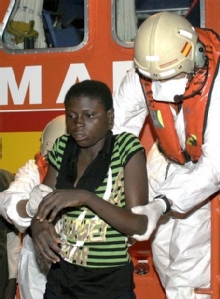 When natural disasters and conflict create unsafe situations for the people affected, and as unemployment and poverty increase, demand for movement far exceeds the possibilities to cross borders legally. The need for people to move may be exacerbated by human rights violations and persecution. Migrant smugglers supply to this demand, preying on vulnerable people for profit, often putting their safety and life at stake. Virtually every country in the world is affected by smuggling-related crimes. The challenge for all countries, rich and poor, is to target the criminals who exploit desperate people, and to protect and assist victims of trafficking and smuggled migrants, many of whom endure unimaginable hardships in their bid for a better life.

On International Migrants Day, UN Member States, intergovernmental organizations and NGOs are invited to disseminate information on the human rights and fundamental freedoms of migrants, share experiences and design actions to ensure their protection.

Building up to this occasion, UNODC is launching a series of stories that display the activities UNODC conducts to assist States to implement the United Nations Convention against Transnational Organized Crime and the Protocols thereto, in the field of: legislative assistance, capacity building, and collection of best practices.

In particular, this series will launch three important global tools* UNODC has developed with the aim to prevent and combat the smuggling of migrants, protect the rights of smuggled migrants and promote cooperation between States to these ends:

*The development of these publications was was made possible through funding received from the European Union.

The Model Law against the Smuggling of Migrants

The Model Law against the Smuggling of Migrants was developed by UNODC in response to a request by the General Assembly to the Secretary-General to promote and assist the efforts of States to become party to and implement the United Nations Convention against Transnational Organized Crime and the Protocols thereto. It was developed in particular to assist States in implementing the provisions contained in the Protocol against the Smuggling of Migrants by Land, Sea and Air. The content of the Model Law was drafted through a comprehensive, collaborative effort conducted through two Expert Group Meetings and reviewed by an expert group of judges and prosecutors. It is available online in Arabic, English, French, Russian and Spanish

Member States often lack comprehensive legislation on smuggling of migrants. The Model Law is a tool to assist States to implement the Smuggling of Migrants Protocol by introducing the provisions that the Protocol requires or recommends that States introduce in their domestic legislation. It addresses specifically:

The Model Law ensures harmonized definitions of the crime and strengthened coordination in response to smuggling of migrants across borders, it also provides a basis for prevention, investigation and prosecution of the crime.

The Model Law both facilitates and helps systematize the provision of legislative assistance by UNODC as well as facilitates the review and amendment of existing legislation and the adoption of new legislation by States. It is designed to be adapted to the needs of each State, whatever its legal tradition and social, economic, cultural and geographic conditions. The process States are suggested to follow is:

UNODC can assist States through capacity building of those involved in the drafting process, such a legal drafting workshop is organized in East African in December

To give effect to this new legislation addressing the smuggling of migrants, States need to build the capacities of their criminal justice practitioners. This can be done with UNODC assistance and training tools.