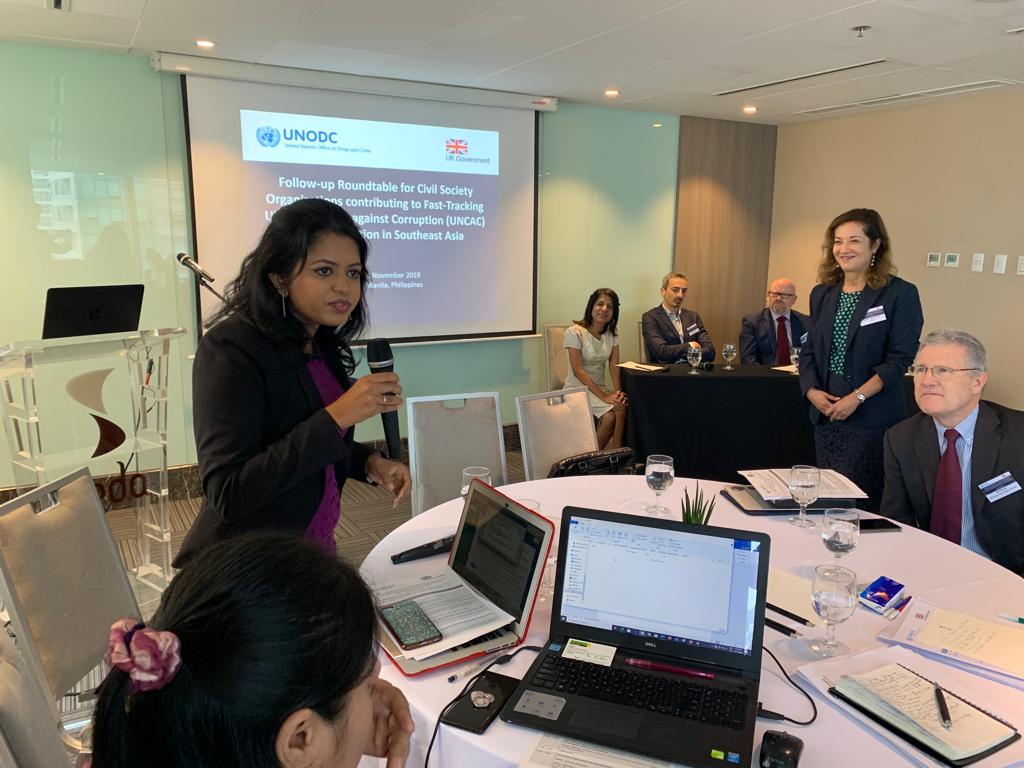 10 January 2020 -  Civil society organisations (CSOs) from across Southeast Asia gathered in Manila to report on work undertaken and design initiatives for collaboration to fast-track the United Nations Convention against Corruption's (UNCAC) implementation in the region.

Twenty-two participants from seven countries used the opportunity to report on their projects across three anti-corruption priority areas, capacity-build, and brainstorm on cross-border CSO initiatives for future activities.

The follow-up roundtable, organised by the United Nations Office on Drugs and Crime (UNODC), was the second meeting involving CSO stakeholders on fast-tracking UNCAC implementation in Southeast Asia following the Regional Conference in February 2017. In the previous roundtable, the CSOs agreed to coordinate around the three themes of access to information, working with the private sector, and integrity of public procurement. The majority of speakers and content was led by CSOs, and the space created allowed for a full and frank discussion on often challenging topics.

CSOs delivered two presentations per theme on specific projects their organisation had undertaken within the last year. During the panel on CSOs working with the private sector against corruption, Leaphea Yang from TI Cambodia said "It is not the sole responsibility of civil society or government or any single entity to tackle corruption but all actors, including the private sector. Additionally, it is in the private sector's interest to uphold a culture of integrity in business and we will only achieve this by everyone's active participation."

Additionally, Warren Smith and John Davies from the UK Government Digital Service presented on the huge savings that had been made through the UK Digital Marketplace scheme which had overhauled the procurement of ICT services in the UK, and whose model is being replicated globally under the UK Foreign and Commonwealth Office's Prosperity Fund, which also encompasses the Fast-tracking UNCAC project.

The roundtable concluded with a session on best practices and the way forward in the region, reflecting on the priorities and initiatives discussed over the two days. The roundtable was organised jointly by UNODC Civil Society Team and the Regional Office for Southeast Asia and Pacific (ROSEAP).

Affiliated Network for Social Accountability in East Asia and the Pacific, Philippines