Triathlete crosses a continent to raise awareness on human trafficking 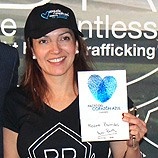 26 March 2014 - Since the Blue Heart campaign was launched in Mexico in April 2010, UNODC has been working in the prevention of human trafficking and to raise awareness among those most vulnerable to this crime. UNODC has joined forces with iEmpathize to support Mexican-Canadian ultra-marathoner Norma Bastidas, a survivor of human trafficking and sexual abuse, in her latest undertaking: to cover more than 5,000 kilometers between Cancun, Mexico, and Washington, DC, through a mix of running, cycling and swimming and thus give more visibility to the issue.

UNODC showcased Norma's project in Mexico City last February, where she signed the Blue Heart Pact, a set of pledges to reject and fight against all forms of human trafficking. Norma plans to finish her adventure, where she will be wearing the Blue Heart symbol, in April.

At 17, already a victim of sexual violence within her family, Norma migrated from her native Sinaloa state to Mexico City with the dream of overcoming a life of humiliation and to start a new chapter. Upon arriving she was kidnapped with the intention of being sold to a human trafficking network. Fortune smiled on her and within hours she was released by the brother of one of her captors.

Norma's own goal for this grueling challenge is to draw attention to the importance of fighting human trafficking and to show her support to its countless survivors throughout the world. As a survivor of human trafficking, Norma knows adversity herself, and has expressed that, "ultra-marathons are devastating, both physically and emotionally, but the challenge is only temporary. After I finish it, my life will return to normal. However, survivors have to overcome enormous challenges every day of their lives."

The journey will be documented by iEmpathize's film crew and turned into a feature-length documentary, "Be Relentless". It is intended to prove that the impossible is possible, and to give hope to survivors and victims, encourage collaboration and mobilization on a global scale, as well as financially support survivors and aftercare partners.

Trafficking in persons is a serious crime that strips people of their rights, ruins their dreams, and robs them of their dignity. It exposes its victims to situations of sexual exploitation, forced labor, domestic servitude, forced marriage, organ removal, and the exploitation of children as beggars. You can learn more about this challenge and support Norma, the film, and the Be Relentless movement at BeRelentless.iEmpathize.org.