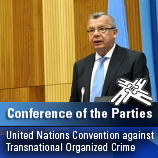 6 October 2014 - UNODC Executive Director Yury Fedotov, in his speech at the opening of the Seventh Session of the Conference of the Parties to the UN Convention on Transnational Organized Crime (UNTOC), said the convention - known as the Palermo Convention - was an extraordinary achievement, but he cautioned Member States that it needed to be nurtured and taken forward.

"To do this", Mr. Fedotov said, "We must work together. The fight against organized crime cannot be won by any one government, nor by governments alone. Civil society and the private sector play an important role, also in raising awareness and strengthening resilience to organized crime."

Mr. Fedotov went on to say Member States needed to continue to share their experiences about new and emerging crimes such as wildlife and forest crime, trafficking in cultural property and trafficking in fraudulent medicines. He also noted that, in the debate about the successors to the Millennium Development Goals, protection against crime and violence remained a top priority of people everywhere.

This message on the need to cooperate against crime was reinforced at a later side-event commemorating the lives of judges Giovanni Falcone and Paolo Borsellino who fought against and lost their lives to organized crime in Italy. The event was also attended by Andrea Orlando, the Italian Justice Minister, and Maria Falcone, the sister of Judge Falcone, among others.

In his statement at the event, Mr. Fedotov said the two judges showed "it is possible to take on transnational organized crime; that no evil is too great to be overcome, and that with commitment and determination, justice can prevail."

The Conference of the Parties to the UN Convention Against Transnational Organized Crime is held every two years. It attracts around 800 ambassadors, ministers, journalists and members of civil society for a weeklong discussion on how to effectively implement the convention, as well as on criminal trends and emerging crimes.