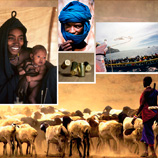 3 February 2016 - UNODC's office in West and Central Africa recently released the latest results of its Sahel Programme, showing the multitude of activities it has carried out, and the large number of people it has benefitted. With 186 activities implemented so far, UNODC has reached more than 5,700 direct beneficiaries and generated concrete results across the region, as detailed in the Sahel Programme Progress Report.

The Sahel is one of the poorest regions of the world. It faces challenges such as extreme poverty, the effects of climate change, frequent food crises, rapid population growth, fragile governance, corruption, illicit trafficking and terrorist-linked security threats. To address this, UNODC started the implementation of its Contribution to the United Nations Integrated Strategy for the Sahel in early 2014, focussing on terrorism prevention, anti-corruption, border management, and the improvement of the region's judicial systems and law enforcement agencies.

The outcomes related to UNODC's Sahel Programme, as it is better known, include:

Following on the above, the UNODC Sahel Programme identified new strategic priorities - included in the latest report - to be pursued alongside regional partners and the international community over the next years. These include enhancing operational capacity and information exchange between members of the G5 Sahel; strengthening capacity in the region to prevent violent extremism and address the threat posed by foreign terrorist fighters (FTF); promoting and implementing de-radicalization policies in prisons; and protecting children affected by terrorism.

The Sahel-Saharan region has always been a trade and migration route. However, factors such as the lack of state authority, weak justice systems, the collapse of the traditional pastoral economy, corruption and the presence of firearms have created an ideal environment for illicit trafficking, organized crime, corruption, money laundering, and terrorism. The UNODC Sahel Programme aims to provide responses to these challenges in an effort to reduce insecurity, injustice and impunity, and promote long-term sustainable development in the region.

UNODC Contribution to the United Nations Integrated Strategy for the Sahel