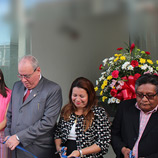 8 September 2016 - In the last few weeks, Panama finalized the transition period towards the implementation of the Adversarial System in its entire territory. By launching the new legal system in the First Judicial District, Panamanian authorities, supported by UNODC, have successfully concluded this 5-year process started in 2011.

Since that year, UNODC has provided support to Panama in this process through a number of national initiatives aimed at strengthening the capacities of the Judiciary, the Office of the Attorney-General and the other national institutions involved in this area, including a $40 million project fully funded by the Supreme Court of Justice of Panama.

In the context of this project, UNODC's Deputy Director for Policy and Public Affairs, Gillian Murray, and the Office's Regional Representative for Central America and the Caribbean, Amado de Andrés, participated in a series of official launching events hosted by Chief Justice José Eduardo Ayú Prado and carried out in different locations of the First Judicial District.

The adversarial system is a legal system where two advocates represent their parties' position before an impartial person or group of people, usually a jury or judge, who attempt to determine the truth of the case. In Panama, the application of the new system will allow for a speedier and more transparent resolution of any conflict between parties.

The First Judicial District is the most important one in terms of size and population density, consisting of three provinces (Panamá, Colón and Darién) and four indigenous territories (Guna Yala, Emberá-Wounaan, Wargandi and Madugandi).

UNODC in Central America and Caribbean