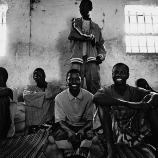 12 October 2017 - With the assistance of the United Nations Office on Drugs and Crime (UNODC) and United Nations volunteers (UNVs),  Niger has processed 230 cases involving terrorism suspects, including 11 women and 25 children, in 60 days.

Amid growing terrorist threats posed by various armed groups such as Boko Haram, Niger established a legal framework in 2011, enabling stronger responses through a criminal law reform and the creation of a judicial unit specialized in counterterrorism (Pôle Judiciaire Spécialisé).

Despite such efforts, access to justice remains limited for detainees associated with terrorism. In fact, more than 1,500 people - including women, children and mentally disabled persons - are currently in pre-trial detention in Niger, often lacking the necessary resources to seek legal assistance. In addition, the number of staff remains insufficient when compared to the arrests and prosecutions related to terrorism.

In this context, UNODC recruited and trained 10 Nigerien lawyers as UN volunteers to assist the specialized unit in improving access to justice and providing legal assistance to detainees associated with Boko Haram, and/or affiliated to the Islamic State.

The work done by volunteers include visiting prisons and interviewing detainees to ensure the lawfulness of their detention and treatment, guiding on the processes, and informing them about their rights.

The collaboration with prison managers and judges has resulted in an improved and accelerated follow-up of cases, the provision of concrete answers to prisoners' questions, and better responses from authorities. Further, cases of excessive pre-trial detention have been reported, leading to in-depth evaluations, and the subsequent release of some detainees.

Speaking of her work, Fatima* said: "Our actions have allowed detainees to understand and know their rights better, and most importantly, to ensure a closer follow-up on their cases to accelerate the procedure." Echoing that sentiment, Ali* said: "I have seen how the work of a volunteer brings a glimmer of hope in the eyes of prisoners."

The United Nations General Assembly adopted the Global Counter-Terrorism Strategy on 8 September 2006. The strategy is a unique global instrument to enhance national, regional and international efforts to counter terrorism. Through the Strategy, Member States expressed commitment to ensuring the apprehension and prosecution of perpetrators of terrorist acts, in accordance with the national and international law, in particular human rights law. In this regard, UNODC and its partners congratulate and encourage UN volunteers in their efforts to work towards an efficient justice system in Niger.

*To ensure their security, UN volunteers are not referred to by their real names.