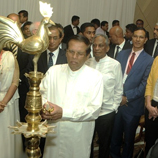 3 August 2018 - With support from the United Nations Office on Drugs and Crime (UNODC) and the United Nations Development Programme (UNDP), a Global Expert Group Meeting on anti-corruption was held in Colombo, Sri Lanka from 25 to 27 of July.

Hosted by the Commission to Investigate Allegations of Bribery or Corruption (CIABOC), the meeting brought together over 40 experts from 30 countries to develop the Colombo Commentary on the Jakarta Principles for Anti-Corruption Agencies.

Participants discussed "guidance on to how to promote and strengthen the independence and effectiveness of anti-corruption authorities" in accordance with articles 6 and 36 of the United Nations Convention against Corruption (UNCAC).

During his opening statement, Maithripala Sirisena, President of Sri Lanka, said that power and corruption go hand in hand, requiring a strong political will, legal reforms, and effective institutions to fight this crime. He emphasised the need for a common platform to act against corruption with the assistance of other countries. Aiming to reach a corruption-free environment "is a move to strengthen democracy, freedom and fundamental rights, and as a whole, a victory for the people," President Sirisena underlined.

Candice Welsch, UNODC's Chief of the Implementation Support Section within the Corruption and Economic Branch, stressed: "no efforts to prevent or combat corruption can succeed without effective anti-corruption institutions."

"Through you, the experts here today, we would like to develop better guidance for States to ensure that their anti-corruption bodies have the necessary independence, skilled staff and resources that they need to operate effectively," she continued, noting that: "This work will build on the Jakarta Principles, to provide further explanation, recommendations and examples of how to implement the Convention against Corruption."

The meeting also provided an opportunity to share experiences of national anti-corruption agencies from Africa, the Americas, Asia, Europe, and Pacific; identify best practices on the effectiveness of institutions; and discuss the draft Commentary on the Jakarta Principles.

Also discussed was concrete guidance on the operationalization of the sixteen Jakarta Principles. This included actual practices and experiences from anti-corruption bodies around the world, particularly on questions related to mandate, collaboration, ethical conduct, immunity, financial autonomy, accountability, and communication.

Following the Expert Group Meeting, UNODC will review and finalize the Commentary on the Jakarta Principles, which will be launched in 2018.