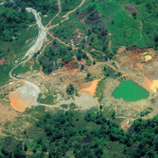 2 July 2018 - The UN Office on Drugs and Crime (UNODC) and the Ministry for Mines and Energy of Colombia recently launched a study on alluvial gold exploitation in the South American country and the relationship of this activity with organized crime.

Presented with the support of the United States, the report indicates that an estimated 66 per cent of this industry in Colombia is not established within existing normative frameworks.

Findings show 6 per cent increase in areas affected by the exploitation: from 79,000 hectares (ha) in 2014 to 84,000 ha in 2016. Of this detected area, 76 per cent was concentrated in Antioquia and Chocó. The municipality of Zaragoza, in Antioquia, represented the most affected area with 6,186 ha, or 7 per cent of the country's total.

The report also warns about the presence of alluvial gold exploitation in excluded and restricted areas for mining such as national parks, indigenous reservations and Afro-descendant community lands. In this sense, Afro-Colombian communal lands were the most impacted among the special territories, with 47 per cent of the gold exploitation instances.

The report offers a research framework to clarify the linkage between alluvial gold exploitation and other illicit activities.

During the report's launch, Olivier Inizan, UNODC Senior Programme Manager, said: "The exploitation of alluvial gold has effects on the environment, security, development and law enforcement. Through this report, UNODC promotes a comprehensive understanding of the territories affected by the illegal exploitation of minerals as a strategic tool for the design of public policies."

The Government of Colombia and UNODC hope to contribute to a better understanding of alluvial gold exploitation activities in the country, offering objective information that contributes towards the formulation of more specialized public policies regarding this phenomenon.