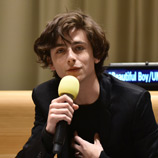 New York, 28 January 2019 - Tackling the vicious cycle of drug addiction, recovery, and relapse, was the focus of a prestigious special screening of the acclaimed new Hollywood film "Beautiful Boy" at United Nations Headquarters on 23 January.

Based on the best-selling memoir "Beautiful Boy: A Father's Journey Through His Son's Addiction" by David Sheff, "Beautiful Boy", starring Golden Globe Nominee Timothée Chalamet ("Call Me By Your Name"), and Steve Carell, chronicles the heartbreaking and inspiring experience of a family coping with addiction over many years.

"Rather than viewing addiction through the lens of morality," as Mr. Sheff said people often do, the movie focuses on the reason behind drug use. Applying this logic to the real-life recovery process, is critical, according to Mr. Sheff, who added that it's easy to forget that those suffering from addiction are in enormous pain.  The screening was followed by a reception in the UN Delegates Dining Room.

A similar message was shared by panelists the next day when the UNODC New York Office hosted a dynamic panel discussion on "Leaving No One Behind: The Drug Epidemic as a Global Health Challenge."  Moderated by Ms. Monasebian, the event, featured David Sheff, pre-eminent researcher/psychiatrist Dr. Nora Volkow, Director of the US National Institute on Drug Abuse; Dr. Gilberto Gerra, Chief of UNODC's Drug Prevention and Health Branch; and, Vicky Cornell, co-founder of the Chris and Vicky Cornell Foundation, and wife of late rock icon Chris Cornell ("Soundgarden"; "Audioslave") who struggled with addiction.

Speakers highlighted the importance of focusing on the human dimension - the women, men and children affected by drug use and dependence - and all of the consequences for health and society that illicit drugs can have.  The panelists spoke at length on the stigma that surrounds addiction, encouraging members of the public to join the cause to bring this brain-altering disease out of the shadows and into daily conversation in order to encourage individuals and families to seek help and treatment for substance use.

"Addiction is a disease, not a choice. It is scientifically proven to be preventable and treatable and yet there is still so much stigma surrounding it that it continues to be perceived as a moral problem or behavioral issue," said Mrs. Cornell.  "When we understand that people are ill, stigma goes away, and we know what to do, we treat them with compassion and we get them the best treatment we can," added Mr. Sheff.   The packed panel discussion was followed by a book signing of "Beautiful Boy: A Father's Journey Through His Son's Addiction," hosted by UNODC and the UN Bookshop.

"Beautiful Boy," marked the fifth film screening organized by the UNODC New York Office in fifteen months, including, "Trafficked" (starring Ashley Judd); "On Her Shoulders" (the Sundance Award Winning Documentary about UNODC Goodwill Ambassador Nobel laureate Nadia Murad); " Love Sonia" (starring Freida Pinto); and "Roma" (nominated for 10 Academy Awards).   Recalling the words of the late film critic Roger Ebert, that "movies are a machine for empathy," Ms. Monasebian reflected that "Art is a powerful advocacy tool to raise awareness and we have always used it to complement our work.".

Panel Discussion: Leaving No One Behind: the Drug Epidemic as a Global Health Challenge (Recording)