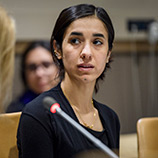 9 February 2018 - Since her appointment in 2016 as UNODC Goodwill Ambassador for the Dignity of Survivors of Human Trafficking, Yazidi survivor and Nobel Peace Prize-Nominee Nadia Murad has been a tireless advocate for victims around the world.

To a packed audience of dignitaries, diplomats and civil society leaders at the United Nations headquarters (UNHQ) in New York, UNODC hosted a special screening of ' On Her Shoulders,' the critically acclaimed award-winning documentary about Nadia Murad. From the refugee camps in Greece to the gilded halls of power, the documentary captures Nadia's experience as she repurposes unimaginable trauma into a powerful rallying cry for justice.

The evening's emcee, Simone Monasebian, head of UNODC's NY Office, said: "Nadia has been an inspiration to all of us. UNODC has been privileged to have her as its Goodwill Ambassador and to share her remarkable story with the UN community. As a survivor-leader, Nadia has been instrumental in raising awareness of and generating support for survivors of human trafficking and other horrific crimes."

The film screening featured welcoming remarks by Ms. Murad, as well as by the film's director Alexandria Bombach. Between July and September 2016, Ms. Bombach and her crew filmed in Ottawa, London and Berlin, as well as at UNHQ in New York and in various refugee camps in Greece.

On Her Shoulders made its world premiere in January 2018 at the Sundance Film Festival, where Ms. Bombach won the Directing Award in the U.S. Documentary section. This is Ms. Bombach's second acclaimed documentary: her first, Afghanistan by Choice, looked at the role of the fledgling free press and photography in post-Taliban Afghanistan.

The exclusive screening marks the film's first public showing since its debut at the Sundance Film Festival in Park City, Utah.

Movie: On Her Shoulders

United Nations Trust Fund for Victims of Trafficking in Persons