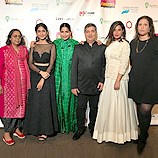 United Nations Headquarters in New York was the backdrop for a prestigious packed red-carpet screening of "Love Sonia", a searing human trafficking drama inspired by true events.  Hosted by UNODC and the NGO Apne Aap, on the International Day of the Girl Child, over 400 distinguished representatives from Governments, civil society, and the arts and media community were in attendance.

The event was moderated by UNODC's New York Office head Simone Monasebian, and featured a question and answer session with the film's Director Tabrez Noorani, cast members, including Freida Pinto ("Slumdog Millionaire"), and the Founder of Apne Aap, Ruchira Gupta.

Starring  Frieda Pinto, Demi Moore, Richa Chadha, and newcomer Mrunal Thakur as the title character, "Love Sonia" is the harrowing account of two sisters robbed of their innocence when one is sold by her debt-ridden father, and the other follows after her in the hope of rescuing her but becomes trapped in the sex trade herself.

In her remarks, Ms. Monasebian recalled that "there are 1.1 billion girls in the world and that every 10 minutes somewhere in the world, an adolescent girl dies as a result of violence, including trafficking and other exploitation and abuse. On this International Day of the Girl Child, we hope this important film brings more 'lights, cameras and action' to end the scourge of trafficking in girls."

Movie attendees were moved by the gripping and thoughtful depiction of the long journey to recovery and reintegration for survivors of human trafficking. They were called upon to support the UN Voluntary Trust Fund for Victims of Trafficking in Persons, especially women and children as they comprise 71 per cent of human trafficking victims.  According to UNODC's Global Report on Trafficking in Persons, trafficking for the purpose of sexual exploitation remains the most detected form of trafficking, and women and girls represent 96 per cent of its victims.

Noorani worked with non-governmental organizations assisting survivors including Apne Aap and the Coalition to Abolish Slavery and Trafficking (CAST), and also participated in several brothel raids in the course of the three years spent bringing "Love Sonia" to the screen. CAST is one of the grant recipients of the UN Voluntary Trust Fund for Victims of Trafficking in Persons, Especially Women and Children, managed by UNODC. Demi Moore portrays a CAST official in the film. The film also features several survivors of human trafficking who act in the film.