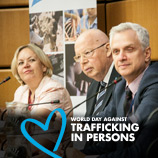 Vienna, 30 July 2019 - Human trafficking is a crime that affects every country. It thrives in situations where the rule of law is weak and people lack opportunities. On World Day against Trafficking in Persons on 30 July, the United Nations is calling for increased action to protect victims and hold perpetrators to account.

"Traffickers and terrorist groups prey on the vulnerable, from people in poverty to those caught up in war or who face discrimination,'" said UN Secretary-General Antonio Guterres in his message for the day. "Armed conflict, displacement, climate change, natural disasters and poverty exacerbate the vulnerabilities and desperation that enable trafficking to flourish," he said.

According to the latest Global Report on Trafficking in Persons, nearly three quarters of all detected trafficking victims worldwide are female and thirty per cent are children. Most detected victims are trafficked for sexual exploitation.

"Human trafficking is a crime and violation that should have no place in our world. Yet 225,000 trafficking victims were detected between 2003 and 2016, and there are many, many more hidden victims who need our help," said the Executive Director of the United Nations Office on Drugs and Crime (UNODC), Yury Fedotov.

The event was attended by, among others, Mr. Fedotov and Alena Kupchyna, Permanent Representative of Belarus. Nazhat Shameem Khan, Permanent Representative of Fiji, Margherita Maniscalco, Programme Director of Cooperazione Internazionale Sud-Sud (CISS), and Adeshola Bello of the non-governmental organization (NGO) Freedom Foundation in Nigeria joined through video link. The latter two NGOs are grantees of the United Nations Voluntary Trust Fund for Victims of Human Trafficking, through which selected NGO projects from around the world are funded to provide direct assistance to victims.

Video messages were shared by Javier Moncada, Vice-minister of Justice and Fundamental Rights of Bolivia; Marjorie Espinosa, Deputy Minister for Consular and Migration Matters in the Ministry of Foreign Affairs of the Dominican Republic; Nicholas Dausi, Minister of Homeland Security of Malawi; Tan Sri Muhyiddin Hj Mohd Yassin, Minister of Home Affairs of Malaysia; and Hasina Kharbhih, Founder of the Impulse NGO Network in India.

Through these contributions, many examples of the serious efforts that countries are making to eradicate human trafficking were highlighted, including the enactment of a new action plan in the Dominican Republic; the setting-up of a law enforcement and trafficking victims fund in Malawi; the establishment of specialized courts in Malaysia; the important and pioneering work of civil society and many other success stories.