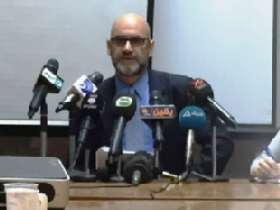 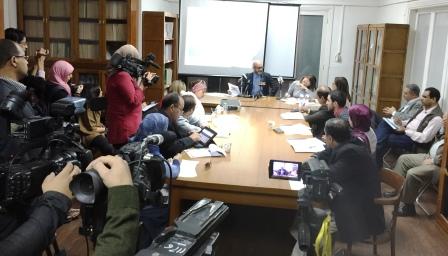 In a press conference held in United Nations Information Centre in Cairo, Mr. Masood Karimipour, UNODC Regional Representative for the Middle East and North Africa, released the UNODC 2014 Global Report on Trafficking in Persons.  The report shows that one in three known victims of human trafficking is a child - a 5 per cent increase compared to the 2007-2010 period. Girls make up 2 out of every 3 child victims, and together with women, account for 70 per cent of overall trafficking victims worldwide.

Highlighting that almost all countries of the MENA region have laws against human trafficking, Mr. Karimipour emphasized the importance of enforcing such laws, and ensuring proper investigation, prosecution and adjudication of trafficking cases while pursuing a rights-based approach towards trafficking victims.

Mr. Karimipour gave a briefing on what UNODC is doing to support member states to curb trafficking in persons in the region, in close partnership with the League of Arab States, namely, technical and legislative assistance, capacity building, regional cooperation and networking, and awareness raising.  He also invited the countries of the region to join the Blue Heart Campaign.

Responding to a question on how to detect human trafficking and organized crime networks, Mr. Karimipour stated "Follow the money".  Organized crime networks pursue profits, and the profits always flow up the ladder to those leading the network. Tracing illicit financial flows would eventually lead to the capture of the leaders of transnational criminal networks.  Also, extend protection, not prosecution, to victims of human trafficking. Treat them as cooperating witnesses to identify traffickers, methods and other vital information to prosecute and punish traffickers.

UNODC reports effective cooperation and technical assistance with the Government of Egypt, Egyptian Ministry of Justice and Ministry of Interior in this regard, commending the leadership and political commitment of the Egyptian Government, in fighting this serious crime.

According to the Report, no country is immune - there are at least 152 countries of origin and 124 countries of destination affected by trafficking in persons, and over 510 trafficking flows criss-crossing the world. Trafficking mostly occurs within national borders or within the same region, with transcontinental trafficking mainly affecting rich countries.

In some regions - such as Africa and the Middle East - child trafficking is a major concern, with children constituting 62 per cent of victims.borders or within the same region, with transcontinental trafficking mainly affecting rich countries.

At the beginning of the press conference, UNODC documentary Affected for Life, was shown to the media.

2014 Global Report on Trafficking in Persons in English

Executive Summary in English, in Arabic