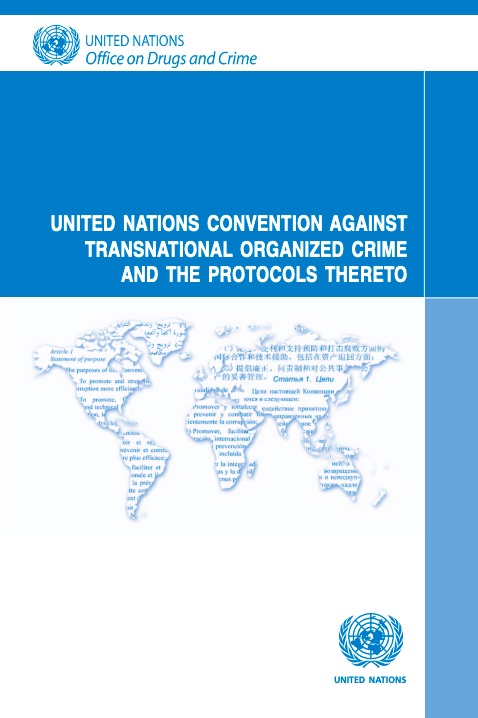 Text of the Convention »

UN General Assembly resolutions adopting the UNTOC and its Protocols

The United Nations Convention against Transnational Organized Crime, adopted by General Assembly resolution 55/25 of 15 November 2000, is the main international instrument in the fight against transnational organized crime. It opened for signature by Member States at a High-level Political Conference convened for that purpose in Palermo, Italy, on 12-15 December 2000 and entered into force on 29 September 2003. The Convention is further supplemented by three Protocols, which target specific areas and manifestations of org anized crime: the Protocol to Prevent, Suppress and Punish Trafficking in Persons, Especially Women and Children; the Protocol against the Smuggling of Migrants by Land, Sea and Air; and the Protocol against the Illicit Manufacturing of and Trafficking in Firearms, their Parts and Components and Ammunition. Countries must become parties to the Convention itself before they can become parties to any of the Protocols.

The Convention represents a major step forward in the fight against transnational organized crime and signifies the recognition by Member States of the seriousness of the problems posed by it, as well as the need to foster and enhance close international cooperation in order to tackle those problems. States that ratify this instrument commit themselves to taking a series of measures against transnational organized crime, including the creation of domestic criminal offences (participation in an organized criminal group, money laundering, corruption and obstruction of justice); the adoption of new and sweeping frameworks for extradition, mutual legal assistance and law enforcement cooperation; and the promotion of training and technical assistance for building or upgrading the necessary capacity of national authorities.

The Protocol to Prevent, Suppress and Punish Trafficking in Persons, especially Women and Children, was adopted by General Assembly resolution 55/25. It entered into force on 25 December 2003. It is the first global legally binding instrument with an agreed definition on trafficking in persons. The intention behind this definition is to facilitate convergence in national approaches with regard to the establishment of domestic criminal offences that would support efficient international cooperation in investigating and prosecuting trafficking in persons cases. An additional objective of the Protocol is to protect and assist the victims of trafficking in persons with full respect for their human rights.

The Protocol against the Smuggling of Migrants by Land, Sea and Air, adopted by General Assembly resolution 55/25, entered into force on 28 January 2004. It deals with the growing problem of organized criminal groups who smuggle migrants, often at high risk to the migrants and at great profit for the offenders. A major achievement of the Protocol was that, for the first time in a global international instrument, a definition of smuggling of migrants was developed and agreed upon. The Protocol aims at preventing and combating the smuggling of migrants, as well as promoting cooperation among States parties, while protecting the rights of smuggled migrants and preventing the worst forms of their exploitation which often characterize the smuggling process.

Full text of the Convention and its Protocols

In its resolution 55/25 of 15 November 2000, the General Assembly adopted the United Nations Convention against Transnational Organized Crime and two of its supplementary Protocols namely: the Protocol to Prevent, Suppress and Punish Trafficking in Persons, Especially Women and Children and the Protocol against the Smuggling of Migrants by Land, Air and Sea.

In its resolution 55/255 of 31 May 2001, the General Assembly adopted the Protocol against the Illicit Manufacturing of and Trafficking in Firearms, Their Parts and Components and Ammunition, supplementing the United Nations Convention against Transnational Organized Crime.