Tunisia: Judges Trained in How to Deal with Human Trafficking and Migrant Smuggling Cases 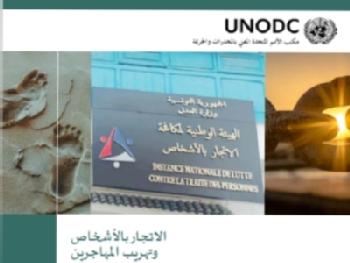 In partnership with the Magistrate Training Institute and the National Committee Against Trafficking in Persons , UNODC organized recently a training session for 160 Tunisian judges based on the updated Manual for Judges tailored to the Tunisian law 2016-61 on Preventing and Combating Human Trafficking which was adopted in August 2016.

Human trafficking is a major concern for Tunisia. Tunisia is a country of origin, transit and destination for victims of trafficking in persons. Migrants originating mainly from West African countries are frequently promised jobs in Tunisia and end up deceived and exploited as domestic workers.

Young Tunisian girls working for well-off families in Tunis or coastal cities often experience freedom restrictions and abuses. Also, abroad, Tunisian women have been promised well-paid jobs, ending up deceived and forced to work in prostitution. Tunisia has seen an increase of both national and foreign migrants departing from its shores in the hope of reaching Europe.

To help judges identify and better understand cases of human trafficking and smuggling of migrants, UNODC supported the development of the above Manual. A first version was drafted by three Tunisian judges during a UNODC-supported Training of Trainers' program in 2015. After the adoption of the 2016 law aligning Tunisian legislation with international standards, the manual was revised by the same local experts. Subsequently, in the past two years, local experts have trained more than 400 judges and law enforcement agents on the new legislation with UNODC support.

The President of the National Committee on Trafficking in Persons welcomed the Manual as "an essential tool for magistrates to deal with the complexity of human trafficking cases".

This training was organized thanks to the generous support provided by the United Kingdom ( UK-CSSF).