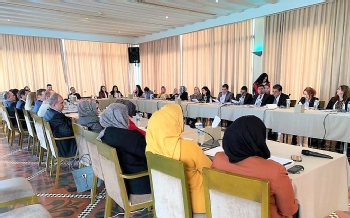 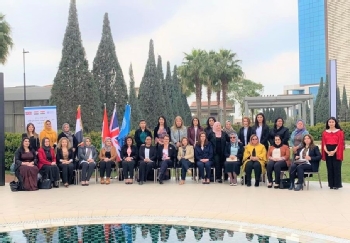 After ISIL's military defeat at the hands of the Iraqi army in 2017, terrorism and violent extremism continue to pose challenges to the country. While undertaking efforts to deal with the aftermath of terrorist attacks, bringing perpetrators to justice, and providing support to victims and survivors, it has been widely acknowledged in the country that it is important to empower women in the ongoing peacebuilding process and the criminal justice response to terrorism offences.

On 7 March 2019, UNODC ROMENA organised a large stakeholders' meeting to launch a new programme on ' Strengthening the Capacity of Women Professionals Working in the Counter-Terrorism Sector," in Erbil. The meeting brought together around 40 representatives from Kurdistan Regional Government (KRG), Ministries of Health, Labor and Social Affairs, Interior, Justice, and Education, parliament, judiciary institutions, United Nations Assistance Mission for Iraq (UNAMI), UN Women, civil society, non-governmental organizations, and the Women Empowerment Organization to gather the views of all sectors involved in the planned programme.

For the past 5 years, UNODC has been implementing various counter terrorism projects in Iraq in collaboration with governmental bodies, nongovernmental entities, members of parliament, prosecutors and judges, amongst many others.  Throughout conducting a wide number of activities, UNODC data has shown that most of the delegations had been male, leading to the proposal of the programme. Therefore, efforts build upon past calls for further empowerment of women's indispensable role in counter terrorism efforts.

The meeting's attendees appreciated the proposals and initiatives put forward by UNODC and highlighted the past related efforts done towards women's inclusion, such as the National Action Plan developed by Iraq on the United Nations Security Council (UNSC) Resolution 1325, on women, peace, and security.

The meeting led to multiple rich discussions and encouraged stakeholders to identify some probable barriers to women accessing decision making posts and obtaining budgets for the women and peace agenda. Stakeholders further stressed to the necessity of including female perspectives and points of view while conducting studies on women.

Many participants clarified that women have long played roles in peace and security as activists, peacekeepers, and fighters. Nadia Murad, Nobel Prize winner and UNODC Goodwill Ambassador for the Dignity of Survivors of Human Trafficking, was a key example for empowered women.

The expected outcomes of the programme are empowered female officials with an enhanced knowledge and capacity in international cooperation on terrorism-related matters, support to women professionals working within the Iraqi criminal justice system and law enforcement in acquiring the knowledge and skills needed to cope with emerging terrorism challenges. The expected results would demonstrate a stronger capacity of women policy makers through trainings and awareness campaigns on the most imminent challenges posed by terrorism that threaten peace.

The programme responds to the UNODC/UNOV Strategy for Gender Equality and the Empowerment of Women and is directed by the common universal legal framework against terrorism developed by the international community. This framework is comprised of the  19 universal legal instruments against terrorism along with the relevant United Nations Security Council Resolutions. The implementation of these conventions, protocols and resolutions is informed by the guidance provided by the  UN Global Counter-Terrorism Strategy along with United Nations General Assembly Resolutions.

The programme is funded by the United Kingdom.