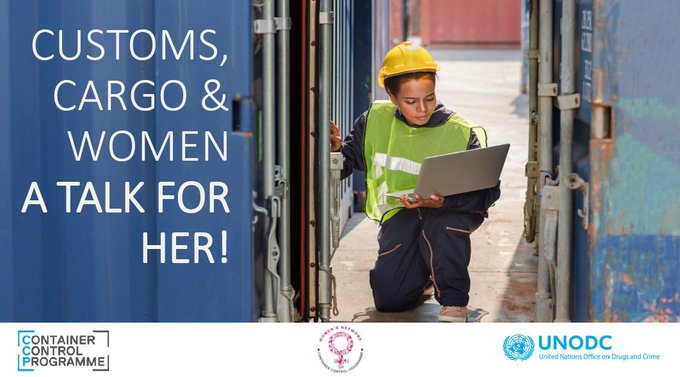 The UNODC-WCO Container Control Programme (CCP) launched a new regional initiative under the name of  'Customs, Cargo & Women – A Talk for Her!', to promote women’s empowerment and gender equality in the Middle East and North Africa (MENA) region.

The first of its kind, this new regional initiative under the framework of the CCP Women's Network aims to connect all women officers working at CCP Port Control and Air Cargo Control Units (PCU and ACCU), as well as relevant women customs and law enforcement officials in the MENA region for regular meetings, coachings and other activities. During these sessions, participants will also have the opportunity to discuss the challenges they face in their daily work and jointly develop a roadmap on how to make the CCP more women-friendly and inclusive in the MENA region.

The new initiative was opened by Wolfgang Aigner, CCP Regional Coordinator for the MENA region, and followed by Ricarda Amberg, CCP Programme Management Officer and the Women’s Network founder. The meeting featured an open discussion of the experiences and challenges faced by CCP MENA women PCU/ACCU officers and related persons in the law enforcement field, which was further enriched by the presentation of the findings of a regional survey on gender equality, conducted by CCP MENA. During this exchange, the participants highlighted the importance of offering forums for women to interact, and share ideas on how the 'Customs, Cargo & Women – A Talk for Her!' initiative can support their work in the future.

The survey findings showed that women want more training opportunities and coaching sessions to develop their technical and personal skills to perform their challenging tasks in cargo control. The majority of the respondents (87%) believe that gender stereotyping and unconscious bias from the management have a negative impact on career progression for women. Additionally, none of the survey participants currently have flexible working arrangement policies in their workplace. Having collected feedback from the survey, an action plan will be developed by CCP MENA to address and tackle the challenges facing women officers in the region.

The meeting also featured keynote speaker Isabel Koch, a leading specialist in setting up alumni networks for the private sector, who spoke about the power of networking for women's professional development and offered guidance on how to improve their networking skills.

The Programme looks forward to furthering the overarching goals of the CCP Women’s Network and replicating this initiative in other geographic regions.

The CCP Women's Network was established in 2015 to actively promote women's roles in the Programme and foster an inclusive dialogue around female participation, leadership, empowerment, and freedom from discrimination in a sector often dominated by men. The Women's Network has made substantial progress in keeping PCU and ACCU officers, donors, private sector partners, civil society and other relevant stakeholders regularly updated on issues and recent developments regarding gender, workplace equality and professionalism.