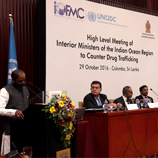 04 November 2016 - In recent days, UNODC and the Government of Sri Lanka co-hosted a meeting to address drug trafficking in the Indian Ocean Region. At the high-level meeting, Ministers and Government Representatives adopted the "Colombo Declaration," which gives way to the forthcoming Southern Route Partnership as the main coordination mechanism for counter narcotics initiatives in this region.

In this regard, Tofik Murshudlu, head of UNODC's Organized Crime and Illicit Trafficking Section, stated: "In the future, the drug enforcement agencies and partner agencies will coordinate their efforts through the mechanism of the Southern Route Partnership which we believe will disrupt the flow of drugs in the Indian Ocean." For his part, Shri Ahir, Minister of State for Home Affairs of India, emphasized the need for more coordination and cooperation to disrupt drug trafficking on the Southern Route.

Maritime routes account for a significant part of Afghan opiates trafficked to Africa and South Asia. The Southern Route from the Makran coast to transit points along the East African coast and South Asian islands has become a major supply route for the distribution of Afghan opiates. The jurisdictional limitations on the high seas make the maritime route a convenient option for the distribution of narcotics across the Indian Ocean.

The increase in volumes of heroin detected on the coastlines of Eastern Africa and Southern Asia indicate the growing importance of the Southern Route. The Combined Maritime Forces (CMF), which patrols the Western Indian Ocean region, seized over 9300 kg of high purity heroin on dhows over the last three years, strengthening the evidence that large volumes of heroin cross the Indian Ocean.

In response to the increase in criminality on the maritime domain, UNODC's Global Maritime Crime Programme (GMCP), spearheaded the establishment of the Indian Ocean Forum on Maritime Crime (IOFMC) in late 2014. The IOFMC brings together littoral states of the Indian Ocean region intending to strengthen regional cooperation and counter criminal activity in the maritime domain.