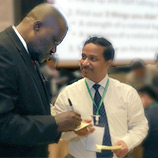 12 July 2017 - According to the United Nations' estimates, the illegal trade in wildlife is the world's fourth most lucrative crime. It has driven some of iconic species to near-extinction while undermining national security and development efforts, threatening the livelihoods of rural communities, and putting entire ecosystems at risk.

Uniting to combat this crime, legal and justice officials from 22 countries spanning Africa and Asia-Pacific met in Bangkok last week to discuss the key elements needed for effective legal frameworks and to coordinate regional and international efforts.

Over 90 participants held two days of deliberations in Thailand at the Africa-Asia Pacific Symposium on Strengthening Legal Frameworks to Combat Wildlife Crime. It was convened by the United Nations Inter-Agency Task Force on Illicit Trade in Wildlife and Forest Products in partnership with the World Bank-led, GEF-financed Global Wildlife Program and USAID.

The symposium offered an opportunity for collaboration between Asia and Africa to strengthen legal frameworks and cooperation in order to address the illicit trade in wildlife and forest products.

Throughout the meeting, participants exchanged ideas in developing, enacting and enforcing effective national laws to combat wildlife crime, including illegal trade in timber and other forest products.

The participants also identified key elements that should be included in national legal frameworks. This includes, amongst others, provisions on the penalization of illegal trade, confiscation of illegally traded specimens, and mechanisms for inter-regional cooperation. Further, they made several important recommendations, including the promotion of international legal cooperation between Africa and Asia-Pacific.

In that regard, Gu Zihua, Deputy Director for the Department of Treaty and Law, Ministry for Foreign Affairs of China said: "This symposium provides a platform for countries in Asia and Africa to strengthen their communication, coordination and cooperation. We are willing to work together with all countries and stakeholders in order to combat wildlife crime."

Similarly, Singdala Soutsaenphaeng from the Office for the Supreme People's Prosecutor of Lao People's Democratic Republic emphasized the need for good cooperation, stressing: "No one country can do this alone."

The working group on minimum provisions of criminalization was moderated jointly by the UNODC Global Programme for Combating Wildlife and Forest Crime (GPWLFC) and the World Bank. Prosecutors elaborated on a number of elements they felt to be essential for inclusion in wildlife crime legislation. The argument being that fines and sentencing need to be of a dissuasive nature in order to deter criminal organizations from trafficking wildlife, timber and fish. The information gathered will be used by the GPWLFC to design a guide on legislation which Member States may consider when strengthening or drafting wildlife crime legislation.

The UN Inter-Agency Task Force was created in 2016 to provide a holistic and comprehensive UN response to the multi-facetted problem of illegal trade in wildlife. UNODC is one of the eight original members of the Task Force, in addition to CITES Secretariat, UN Development Programme (UNDP), United Nations Environment Programme (UNEP), Department of Economic and Social Affairs, Department of Political Affairs, Department for Peacekeeping Operations, and the Department of Public Information, and is open to work with other UN entities addressing issues related to illicit trade in wildlife.