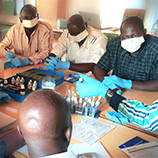 7 June 2017 - Amid insufficient security measures, illicit drug use and prescription drug abuse in Malian prisons continues to be a public health concern. While the use of easily detectable traditional narcotics has decreased in the last years, newly manufactured chemical drugs pose a growing challenge for the national law enforcement officers.

To tackle this issue, UNODC recently organized a training workshop, requested by the Mali's Regional Prison Administration, on the identification of illicit and legal drugs in the Ségou region as insufficient security measures lead to trafficking and consumption of controlled substances.

According to a penitentiary services' Director, the workshop was of "utmost importance, because Mali is both a transit and destination country for drug and precursor trafficking."

Similarly, a prison supervisor said that the knowledge acquired through the training will help him and his team with cell searches, when controlling new inmates and checking packages sent to prisoners by their relatives.

At the workshop, attended by 40 prison officers, UNODC drug and precursors identification kits were distributed, enabling participants to distinguish legal drugs from illicit ones. Compared to traditional kits, this tool helps identify a broader range of narcotics, including recently-created types.

Noting that every prison would benefit from having access to UNODC kits, participants said that the tool would provide law enforcement officers with rapid and simple colour tests for the preliminary identification of most commonly encountered drugs and precursors in illicit trafficking. In the cases where presumptive positive results are obtained, the suspected material is submitted to an authorized laboratory for further confirmatory analysis.

Recently, UNODC donated 8 drug test kits and 8 precursor kits to the Malian National Health Laboratory. Two of these kits (one of each kind) were subsequently provided to the Ségou prison administration. These donations are part of UNODC's contribution to the fight against drug trafficking and organized crime in the country.

In the framework of the Sahel Programme, UNODC is working closely with the United Nations Multidimensional Integrated Stabilization Mission in Mali (MINUSMA) to promote stability in the country through supporting Security Sector Reform.  Since the launch of this partnership in 2014, UNODC activities in Mali have led to significant operational results.