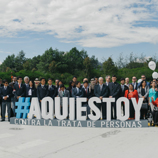 Quito, 17 April 2019 - Ecuador, supported by the United Nations Office on Drugs and Crime (UNODC), formally adopted the #AQUIESTOY (I'm here) campaign on 11 April, which aims to raise public awareness of human trafficking and to promote a 1-800 number to report suspected trafficking cases.

Between January 2017 and December 2018, Ecuadorian authorities rescued 287 trafficking victims, mainly from sexual exploitation and forced labour. Most of these cases occurred within the country and exploitation most often took place in the capital Quito. Ecuador has a solid legal framework and specialized entities to investigate and prosecute human trafficking, but greater involvement and cooperation of the public would make these structures even more effective.

At the high-level launch event, the Minister of Social and Economic Inclusion, Berenice Cordero, said that the adoption of the #AQUIESTOY campaign by Ecuador is another effort displayed by the National Government to tackle human trafficking and a golden opportunity to convoke stakeholders from all sectors to rescue victims from the tentacles of traffickers and exploiters.

"Today Ecuador says #AQUIESTOY against human trafficking and UNODC says #AQUIESTOY with enthusiasm to support and accompany the country's efforts to tackle this crime in the framework of the National Plan of Action against Human Trafficking", said Kristian Hölge, UNODC Representative for Peru and Ecuador.

According to the 2018 UNODC Global Report on Trafficking in Persons, 72 per cent of detected human trafficking victims are women and girls. Ecuador fits this trend, but groups such as people with disabilities, returned migrants, indigenous communities, and youth with access to the Internet are also vulnerable. Ecuador has also become a country of transit and destination for thousands of migrants from Venezuela who are at great risk of suffering different types of exploitation.

The campaign material was presented by Felipe De La Torre, UNODC Public Information Officer, who highlighted that human trafficking is a harsh reality for many people who demand to be heard, rescued and given another chance. He also said that #AQUIESTOY aims to include all possible victims and referred to communication tools for persons with visual impairment that the campaign has developed.

A delegate from TAME EP, Ecuador's flagship national airline, told the audience that more than 200,000 people including passengers, clients and their crews were sensitized after the airline formally adopted #AQUIESTOY in September 2018.

#AQUIESTOY has already reached 88 million people and with the participation of Ecuador UNODC expects this number to increase. The campaign's central graphic element is a balloon, which is usually a symbol of happiness, innocence and freedom. But when tied, it loses its ability to fly and to move independently - just like human trafficking victims. The Campaign material includes postcards and TV spots designed specifically for the Ecuadorian context.

Around 200 representatives from the central and local governments, the diplomatic corps and UN agencies, civil society and the private sector attended the high-level launch in Itchimbía, Ecuador. Participants included the Minister of Social and Economic Inclusion, Berenice Cordero; the Under-Secretary for Citizen Security Diego Tipán; the UN Resident Coordinator, Arnaud Peral; the UNODC Representative for Peru and Ecuador, Kristian Hölge; and Verónica Supliguicha, head of the Red Antitrata de Quito.