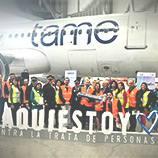 Every year, criminal organizations traffic tens of millions of people, robbing them of their rights and dignity. Trafficking for sexual exploitation and forced labour are the most frequently detected forms of this crime, but victims are also used for forced marriages, benefit fraud, pornography, organ removal and as beggars.

Human trafficking is a global phenomenon and happens within countries, between countries, and across continents. The speed and convenience of the aviation industry can be misused by traffickers to transport their victims.

The industry is therefore a key partner in the fight against this crime and has already scored important successes. Appropriately trained flight-crew and other customer-facing staff have detected trafficking situations and saved victims from exploitation. Not least due to the large amount of time cabin crew spend with passengers, they can act as additional sets of eyes and ears to fight this crime.

Aware of airlines' and airports' crucial role in the prevention of human trafficking, TAME EP has become the first South American airline to join the Blue Heart campaign. The company plans to raise awareness about trafficking issues through broadcasts, in-flight magazines, websites, social media and communications in waiting rooms and at ticket counters.

The signing ceremony that officially launched the partnership was held in the company hangar at Quito International Airport and was attended by the delegate of the International Air Transportation Association (IATA) for Ecuador.

Kristian Hoelge, Representative of UNODC for Peru and Ecuador, said "when we hear the stories of people who were deceived and moved to unknown places with the purpose of exploitation, we need to act. Blue Heart invites us to take action, denounce the crime, and prevent it."

Octavio Perez Sierra, General Manager of TAME EP, said it is very important for the new management to drive the company considering its social impact. Thus, for TAME EP it is a commitment to be the first airline to join the #AQUIESTOY Blue Heart campaign in South America.

The formal presentation of the campaign was carried out by Felipe De La Torre, Programme Management Officer of UNODC Mexico, who addressed the audience and invited them to join the #AQUIESTOY movement, sharing videos, posters, and messages so that the information reaches the most vulnerable.

During the 74th Annual General Assembly of IATA in Sydney, Australia, UNODC promoted the Blue Heart Campaign as the international symbol of the fight against human trafficking, raising awareness of major airlines, airports, and suppliers of the industry. The assembly ended with a unanimous approval of a resolution urging the aviation sector to take actions to prevent and combat human trafficking. With the launch of its campaign, TAME EP is taking concrete actions to implement the resolution.