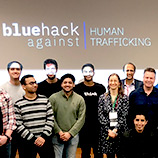 25 March 2019 - During a hackathon co-organized by the United Nations Office on Drugs and Crime (UNODC), 45 students of the Stevens Institute of Technology in New Jersey, USA, spent 32 hours designing innovative tech-based solutions to identify, increase awareness and enhance the use of information to prosecute human trafficking cases.

UNODC partnered with the Innovation Program and Corporate Citizenship Department of IBM, the Stevens Institute of Technology and the Colombian youth organization 'Pasos Libres' to organize this third Hackathon against Human Trafficking, and first one in the United States, from 9 to 10 March.

#BlueHack is a competition of technological innovation against the clock that promotes collaborative and interdisciplinary work among young IT experts to find, in teams of five, solutions to a social problem or a business need. During the event, UNODC colleagues, Pasos Libres Foundation as well as assistant attorneys and a data engineer from the Human Trafficking Response Unit at New York County District Attorney's Office provided substantive mentorship to the participants while IBM and professors from the Stevens Institute of Technology provided technical advice on IT matters.

According to the 2018 UNODC Global Report on Trafficking in Persons, connections in cyberspace and use of social media networks have developed into the main ways for people to interact in modern societies. However, these opportunities entail new risks. Cases collected by the Report show how perpetrators sequence their actions by identifying victims on social media, creating dependency, subsequently entrapping them in exploitative situations. Nevertheless, alleged perpetrators also leave traces in social media, which are increasingly collected and used in court.

Last year, UNODC and IBM organized two similar competitions in Colombia and Brazil, in line with a mandate from the Commission on Crime Prevention and Criminal Justice (CCPCJ) received in Resolution 27/2 of 2018 to improve and build capacities to prevent and combat trafficking in persons that is facilitated by the criminal misuse of information and communications technologies, and to utilize technology to prevent and address such trafficking.

The winners of the competition were awarded an invitation to an important IT conference to be held in the coming months at the IBM Thomas J. Watson Research Centre in Yorktown, as well as the provision of technical advice from Stevens Institute of Technology and UNODC to develop their solutions. Through #BlueHack, UNODC contributes to the implementation of the 2030 Agenda for Sustainable Development, and in particular SDG 16 on the strengthening of peace, justice and strong institutions.