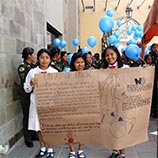 Tarija (Bolivia), 23 September 2019 - Bolivia, through its Ministry of Foreign Affairs, joined the United Nations Office on Drugs and Crime (UNODC) Blue Heart campaign to prevent and combat human trafficking on 20 September, during an event held in the Patio del Cabildo of the Municipality of Tarija.

In the presence of more than 300 students and citizens of Tarija, the Minister of Foreign Affairs, Diego Pary, the Vice-Ministers of Consular Affairs, Raúl Castro, of Citizens' Security, Wilfredo Chávez, of Justice and Fundamental Rights, Javier Moncada, departmental and municipal authorities, and the Representative of UNODC in Bolivia, Thierry Rostan, signed the "Pact of the Blue Heart", a symbolic document of adherence to this global movement.

During the event, broadcast worldwide through social networks and live-streamed in the halls of the Ministry of Foreign Affairs in La Paz, Cochabamba, and Santa Cruz de la Sierra, the UNODC Representative delivered the Blue Heart pin to the Ministry of Foreign Affairs and the authorities present, acknowledging their commitment to participate in the awareness raising activities of this campaign.

Rostan said that the Blue Heart campaign currently has the support of 28 countries, among which in the region Mexico, Brazil, Colombia, Ecuador, Peru, Guatemala and Panama.

"Trafficking of persons is one of the cruelest manifestations of transnational organized crime, and one of the worst violations of human rights. Human trafficking is not a modern phenomenon. Throughout history, vulnerable people have been treated as commodities, objectified and exploited for the benefit of others," said the UNODC Representative.

He recalled that, in the Global Report on Trafficking in Persons of 2018, UNODC indicates that countries are detecting and reporting more victims of human trafficking every year. In 2016, the number of victims reported globally increased to 24,000.

"Most human trafficking flows happen between neighboring countries. Bolivian victims are detected in border countries such as Argentina, Brazil, Chile, Paraguay or Peru, where they often arrive through deception or under false promises of better living conditions, to ultimately be used as cheap labor in clandestine sewing workshops, in the planting and harvest of agricultural products or for commercial sexual exploitation in brothels or clandestine centers, among others", said Rostan explaining the importance of Bolivia's adherence to the Blue Heart campaign.

He announced that the Ministry of Foreign Affairs and the UNODC will develop an action plan that includes a training of consular officials on their action in relation to human trafficking. Rostan explained that the campaign includes recreational, cultural and sports activities throughout the country with the participation of private enterprises, civil society organizations, NGO and academic institutions. He highlighted the commitment of the Bolivian airline BOA in the campaign, considering the fundamental role that aviation companies have in the prevention and combat of this crime.

"Today, each of us has the opportunity to express solidarity with the victims of human trafficking and the opportunity to spread the message that 'human beings are not for sale", said Rostan, inviting citizens to "make a pact with their hearts" and raise awareness about this crime, which is closely linked to other grave crimes such as kidnapping, extortion, money laundering, corruption, drug trafficking and the smuggling of migrants.