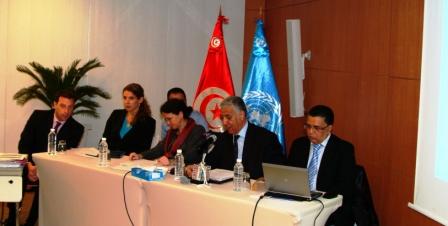 Subsequent to the January 2011 "Jasmine Revolution", and in response to popular demands, Tunisia has undertaken the reform of its institutions. One landmark in this process is the adoption of the Constitution, which enshrines the rule of law and one of its most important component, the independence of the Judiciary.

In this context, UNODC is supporting judicial reform in Tunisia, with a focus on judicial integrity and accountability. The UNODC programme in this field was kicked off with a workshop held in Tunis on 25-26 March 2014 on judicial integrity for forty magistrates, organized with the Tunisian Center for Legal and Judicial Studies.

The workshop was opened by Mr Ridha Ben Amor, Cour de Cassation General Prosecutor. He congratulated UNODC for this initiative and underlined the importance of this Workshop for Tunisian judges "to better solve the equation between integrity, accountability and independence".

During the workshop, participants reviewed international standards on judicial independence and integrity and judicial codes of conduct from around the world. While the new Constitution contains a number of provisions on judicial independence, further legislative work will be required to set out an effective framework. In addition there is currently no set of standards on judicial ethics in Tunisia and there were detailed discussions in relation to the adoption of a code or principles of judicial conduct and on training needs. UNODC will support further efforts by the Tunisian authorities, including the Centre for Legal and Judicial Studies, to develop a draft code of conduct.

UNODC experts also visited the Magistrate School to teach approximately 240 students (200 Tunisian and 40 Congolese) on judicial integrity, including through the use of case studies.

The workshop and lecture were delivered as part of the Project Tun X80: " Strengthening Respect for Human Rights and the Rule of Law in the Criminal Justice and Law Enforcement Sectors in Tunisia, with a focus on the Police and the Judiciary", funded by the  Bureau of International Narcotics and Law Enforcement Affairs (INL), USA.