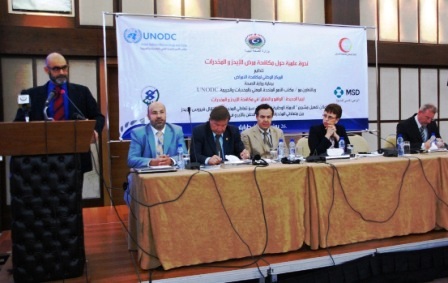 UNODC, UNAIDS, WHO, the European Union and the National Center for Disease Control met to hear the new evidence confirming the suspected concentrated HIV epidemic among people who inject drugs in Libya, and to confer on the identified priorities for a strengthened and multi-sectorial national response during the Scientific and Advocacy Symposium on HIV/AIDS. The event was organized by UNODC and the National Center of Disease Control under the auspices of the Ministry of Health in Tripoli.

Welcoming the participants to the meeting, the Libyan Minister of Health, H.E. Dr. Fatima Elhamrosh called for urgent action from all sectors concerned in Libya. "We will need to develop and implement comprehensive programmes to respond to the growing HIV epidemic among key populations in Libya," said Minister Elhamrosh.

At the Symposium, the Liverpool School of Tropical Medicine presented the results of the Bio Behavioral Surveillance Study conducted prior to the armed conflict with technical and financial support from the European Union. The study conducted among key populations at higher risk of HIV transmission indicates an HIV prevalence of 87 per cent among the sample of 328 persons who inject drugs (PWID), 3.5 per cent among the sample of 227 men who have sex with men, and 15.7 per cent among the sample of 69 sex workers. The HIV prevalence rate among people who inject drugs is the highest ever reported figure and flags the urgent need for an evidence-based comprehensive response.  The results also indicate a 90 per cent hepatitis C prevalence among PWID, an overlap of high risk behaviors and the potential for the epidemic to spread to the general population through bridging groups. Today, it remains unclear how the armed conflict has further augmented and/or geographically spread the HIV epidemic.

The Symposium heralded the re-launch of the UNODC technical assistance project "Prevention of drug abuse and HIV/AIDS among drug users, injecting drug users and vulnerable populations in Libya" which was interrupted during the armed conflict. The conflict in Libya had severely disrupted the provision of, and access to, healthcare services to the general population, particularly affecting people living with HIV. Under the framework of said technical assistance project funded by the Government of Libya, efforts are being undertaken to support the National Center for Disease Control in leading the harm reduction response in close cooperation with civil society organizations. Plans are underway to establish the first drop-in center in Tripoli to provide comprehensive harm reduction services to PWID such as voluntary HIV testing and counselling, information, education and communications materials provided through community outreach programmes, drug dependence programmes and referral to HIV/HCV treatment, and other services.

There is a need to further support the establishment of a comprehensive system of evidence-informed drug dependence treatment and care in Libya which is hampered by limited human resources. There is in fact a considerable need to strengthen the available services in terms of NGO and governmental capacities for evidence-based drug dependence treatment and rehabilitation.

Reaffirming UNODC determination and readiness to respond to new and emerging challenges in Libya, Mr. Masood Karimipour, UNODC Regional Representative for the Middle East and North Africa, indicted that "UNODC warmly welcomes the expressions of political will and commitment by the Libyan Government to respond to the HIV and drug use crisis as a matter of national priority" and highlighted that "UNODC is proud to be in partnership with Libya to help provide a comprehensive response for the prevention and care of HIV among people who inject drugs and in prison settings in coordination with all national stakeholders, UNAIDS and the international community." UNODC as part of the UN Joint Team on HIV/AIDS will be providing technical support in the development of the National HIV Strategy.

The Symposium also coincided with a two-day training workshop, held during the period 27 to 28 June 2012, among prison health staff on HIV prevention and care and drug use in prisons and other closed settings. Twenty-one prison health staff working in prison settings under the Ministry of Justice participated in the event where the comprehensive package of 15 HIV prevention and care interventions in prisons and closed settings recommended by UNODC was presented. The training covered the elements of a comprehensive response to HIV in prisons as well as the promotion of medical ethics and human rights for people living with HIV in prisons. The event also coincided with global launch of the World Drug Report 2012 and the annual celebrations of the World Drug Day.