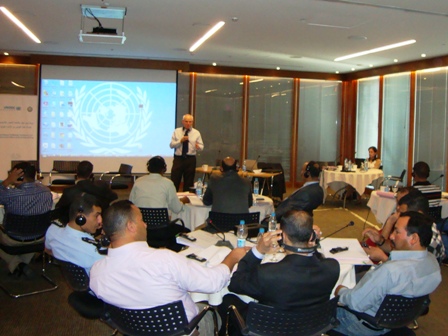 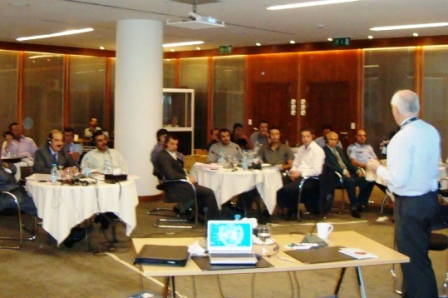 Recently, 33 law enforcement officials from the Jordanian and Iraqi Ministries of Interior gathered in Amman, Jordan, to attend a three-day anti-human trafficking workshop organized jointly by UNODC and the League of Arab States. The objective of the workshop was to build the capacities of those law enforcement practitioners to effectively prevent and investigate cases of human trafficking while assisting and protecting victims of trafficking.

Both Jordan and Iraq are State Parties to the United Nations Convention against Transnational Organized Crime and its supplementing Protocol to Prevent, Suppress and Punish Trafficking in Persons, especially Women and Children, and have also drafted and enacted domestic anti-human trafficking legislation.

During the first day of the Workshop, presentations focused on the efforts of UNODC and the League of Arab States in combating human trafficking, as well as on exploring the main elements of the crime and its forms in the region. During the following days, participants received specialised training on investigation and interviewing techniques, and were provided with the tools to ensure effective prosecution while guaranteeing the rights and protection of trafficking victims.

The training modules were developed mainly on the basis of the Anti-Human Trafficking Manual for Criminal Justice Practitioners, and trainers included experts from UNODC and the League of Arab States, as well as representatives of the International Organisation for Migration (IOM) and UNICEF-Jordan.

This workshop falls within the framework of the UNODC project "Strengthening the Framework of the Arab Region to Prevent and Combat Human Trafficking". Complementing the Arab Initiative to Combat Human Trafficking, the project aims to intensify and coordinate national and regional counter-trafficking efforts within a sound regional coordinating framework, bringing together the potential of all interested partners to combat human trafficking in a concerted and efficient way.