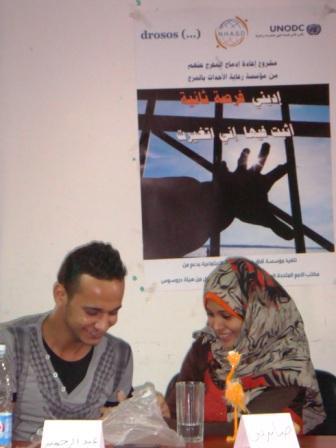 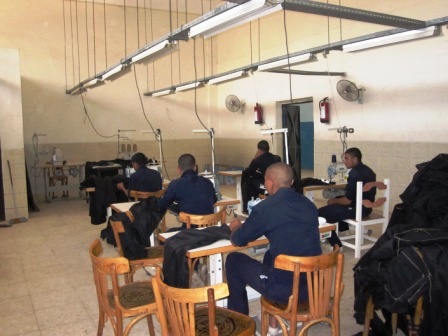 It was an evening of celebration. Abdul Rahman, his family, relatives and friends had gathered to celebrate the wedding of a relative. It was supposed to be an evening of joy, good food and music, instead it became the evening that thrust the life of 16-year old Abdul Rahman in an unexpected direction.

In a country where lower-income families face harsh living conditions, drugs are a common escape. Hashish is customarily offered to guests at weddings and events. In line with tradition, Abdul Rahman was tasked with bringing hashish for the guests when he was caught by the authorities. He was sentenced to three years in the Juvenile Correctional Institution in Marg. Three months prior to his release, Abdul Rahman benefited from the UNODC rehabilitation and reintegration programme undertaken with the Ministry of Insurance and Social Affairs and implemented by New Horizons Association for Social Development, an NGO to whom UNODC provides technical support.

While serving his sentence in the facility, Abdul Rahman participated in professional training workshops, arranged by New Horizons and refurbished and equipped by UNODC, where he honed his skills and thus increased his ability to provide for himself upon release. Abdul Rahman, who loves knitting, was enrolled in tailoring workshops until he perfected his tailoring skills.

"With the assistance of UNODC, I opened my own tailor shop in Beni Suef.  They also helped me improve my housing situation so as to be able to get married". Following his release, Abdul Rahman and his family received psychosocial care to work through their ensuing differences. Abdul Rahman was also re-registered in his industrial secondary school in Barot and found employment in a ready-made garments factory where he stayed until he was able to open up his own tailoring shop.  In gratitude to, and recognition of, UNODC Reintegration and Rehabilitation Programme, Abdul Rahman provided two former Marg juveniles with work opportunities through his connections! Accompanied by his wife Sabrine, Abdul Rahman is also keen to attend every youth meeting organized to tell his story to juveniles and to offer them work opportunities.  In fact, two years after his release, Abdul Rahman has already employed a total of four young men in his tailor shop.

Abdel Rahman is one of the 492 young men from ten governorates who to date have benefited from UNODC educational, administrative, legal, social, health and psychological assistance provided inside and outside the Correctional Institution in Marg.  Catering to their educational and skill-building needs, UNODC has refurbished and equipped various vocational training workshops, such as carpentry, electricity, welding, cooling, dyeing, and tailoring workshops. Recognizing the importance of leisure time for juveniles' physical and mental health, UNODC has also built a gym, two football fields, and a movie theatre for the young men inside the Institution.

Above all, three months prior to their departure the young men are encouraged to construct a 'life plan' together with a social worker, the purpose of which is to outline the path they wish to follow upon their release. UNODC provides the juveniles with adequate knowledge and skills training as well as small financial loans in order to set up projects and materialize their dreams, and continues to follow-up with them to ensure that they reach their goals.

UNODC believes that juveniles, with proper educational, social, legal, health, and psychological assistance and follow-up, have a positive role to play in society and deserve to be given a second chance. Thus, UNODC provides these juveniles with a second chance through its Juvenile Justice Programme in Egypt which is funded by  Drosos Foundation, Switzerland. The first phase of the project, "Strengthening Legislative and Institutional Capacity for Juvenile Justice in Egypt", began in 2003 and the second phase, "Reintegration of Released Children and Youth into the Egyptian Society" will be completed in December 2012. A third phase is planned to start at the beginning of 2013.

New Horizons Association for Social Development, is an NGO working to help underprivileged groups in Egypt. To find out more about their activities, please visit their website.

To watch a brief documentary on UNODC work in this project click here.