Jordan: Supporting the National Economy and Stability through Securing and Facilitating Trade 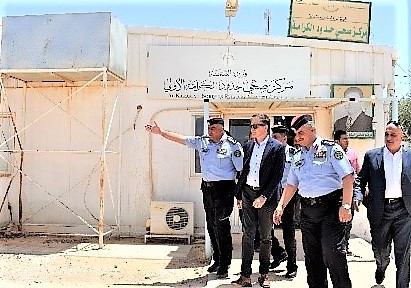 On the 23rd and 24th of July 2018, the United Nations Office on Drugs and Crime (UNODC), the International Organization for Migration(IOM) and the European Union(EU), undertook crucial steps towards supporting the reopening of the Karamah Border Crossing; the main commercial and passenger passage between Jordan and Iraq.

UNODC conducted a technical preliminary assessment of the Karamah Border, that will be followed by a detailed one in September 2018. The initial assessment was conducted to analyze the cargo situation at the Karamah border, and paralleled with an assessment focusing on passengers, conducted by IOM.

This initiative came as a solution to the decline in Jordanian economic growth due to the conflicts in Iraq and Syria that have resulted in deviated commercial routes, and consequently increased exports and import prices in and out of Jordan. During the period between 1992 and 2008 when the border was fully operational, the border crossing served an average of 3,000 passengers and up to 2000 trucks per day.

After three years of closure, the border post was re-opened in August 2017. It will be upgraded through a project funded by the EU Instrument contributing to Stability and Peace (IcSP) and implemented jointly by IOM and UNODC. The optimal use of the UN agencies' expertise and resources to support the Jordanian Government in areas of need has been established by the delivering as one approach, adopted by the UN in Jordan through the recently signed UN Sustainable Development Framework (UNSDF); an instrument that outlines the common identified priorities of the United Nations and the Government for the next years.

The Karamah project focuses on increasing the capacity of the border, this encompasses increasing volume, procedures, and improving the quality of the services catered to companies and passengers, whilst maintaining security at the border through reducing potential threats at the Karamah border crossing point. The project will address the infrastructural, equipment and procedural needs of the border crossing.

The project comes as a response to Jordan's priorities, as well as a request by the national authorities to support and prioritize the Karamah crossing point, due to its significance in flourishing the Jordanian economy via trade facilitation and security. This project is a part of the UNSDF 2018-2022 developed by the UN in consultation with the Jordanian government and with support from the EU, as it will enhance opportunities and contribute to sustainability, job creation and security.