Libya: Advanced Training to criminal justice practitioners on Trafficking in Persons and Smuggling of Migrants 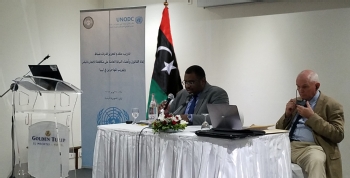 UNODC/ROMENA organized an advanced training workshop on trafficking in persons and smuggling of migrants for 23 Libyan law enforcement officers and prosecutors from 24 to 26 June 2018 in Tunis, Tunisia. The advanced training followed the basic training that participants had taken from 2 to 4 May 2018.

The basic training had provided participating law enforcement officers and the prosecutors with the knowledge of the basic concepts of trafficking in persons and smuggling of migrants as well as on how to identify, investigate and prosecute such cases while ensuring assistance and protection to the victims.

During the advanced training, the participants worked extensively on real life-inspired scenarios identifying and differentiating between actors responsible for trafficking and smuggling networks, trafficked victims and smuggled migrants. Participants were also trained on using advanced investigation techniques and forensic tools relevant to the Libyan context.

Throughout the discussions, some participants shared the harsh working conditions they face when investigating these crimes, and the challenges they come across when assisting victims. A law enforcement officer from the participants described the situation on the ground and explained that in most cases " Migrants [are] not able to tell us about the route they have taken to reach Libya. Smugglers transport them in trucks that have no windows. They move at night, when it is completely dark."

The workshop is part of UNODCs efforts to assist the Libyan authorities in enhancing their criminal justice response to human trafficking and smuggling of migrants thus contributing to the Sustainable Development Goal 16 on strong, effective and accountable institutions.

At the national level, the country has adopted Law no. 19 on combatting irregular migration in 2010. In 2013, a draft law to combat trafficking in persons was prepared.  More recently, the decree no. 386 of 2014 established a Department to combat irregular migration mandated to implement the national legal framework on migrants' smuggling and trafficking in persons and deal with the situation of migrants in the country.

This training activity was possible thanks to the support of the Government of Italy.