Algeria: Working with Airports on Improving the Border Security 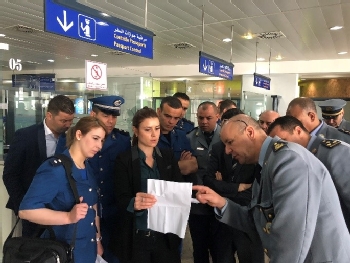 In cooperation with the French Customs, the UNODC Airport Communication Project (AIRCOP) organized a training on "Profiling and Targeting of Suspicious Passengers" from 27 to 31 May 2018 in Algiers, Algeria, funded by Canada.

The French customs expert, active at Paris Charles De Gaulle International Airport, shared her experience on several topics such as the various types of passenger information (API/PNR), system access and data analysis with the participants.

The training was followed by an on-site mentoring session at Houari Boumediene International Airport. It provided the participants with hands-on experience on passenger risk assessment and targeting. The participants selected two flights arriving at Algiers airport, allowing them to use in real life the knowledge just received.

The project, funded by Canada, France, Japan, Netherlands, Norway, the United States of America and the European Union, was initially designed in 2010 as part of the European Union's Cocaine Route Programme. Since then, it has expanded its scope to cover multiple threats targeting airports, including all illicit drugs, other illicit goods (such as wildlife, counterfeit medicine or weapons) and most recently terrorism and trafficking in persons. The project has also expanded its geographical coverage and its network currently covers over 30 countries, including 24 airports with a JAITF and 5 associate countries in Africa, Latin America, the Caribbean and the Middle East.