Morocco - A Thriving Partnership in Support of the Rule-of-Law, Justice and Health 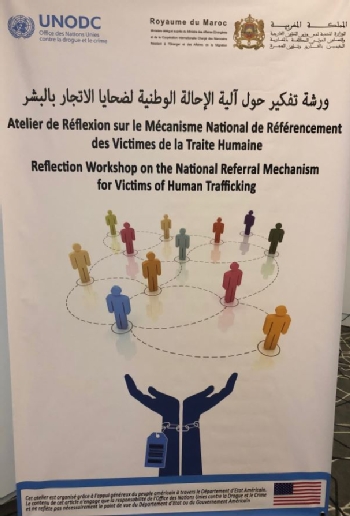 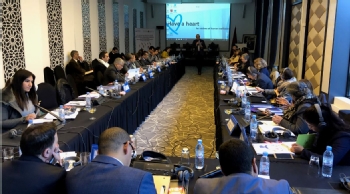 On 11 and 12 February, the UNODC Regional Office for the Middle East and North Africa and the Delegated in charge of Moroccans Residing Abroad and Migration Affairs organized a workshop in Rabat (Morocco) with national and international partners to encourage reflection on a future National Referral Mechanism for Victims of Human Trafficking in support of Morocco's new law on human trafficking.

In addition to a variety of national stakeholders, including the General Prosecutor's Office, Ministry of Justice, the Ministry of Solidarity and Social Development as well as local Civil Society Organization platforms, the meeting brought together experts from Bahrein and Nigeria where UNODC had supported a similar mechanism. Also, seasoned experts from the Council of Europe and the OSCE provided valuable insights on the prerequisites for establishing a national referral system as well as good practices from countries with a long-standing legislation on anti-human trafficking.

The workshop paved the way for future thinking and action towards the national referral mechanism and the development of practical tools such as Standard Operating procedures in support of Morocco's national legislation and institutional framework on human trafficking.

Both workshops are an integral part of a broader package of cooperation between UNODC and the Government of Morocco encompassing country-specific activities in the following areas: (i) terrorism prevention focusing on the criminal justice response in particular in the area of Foreign Terrorist Fighters, in addition to countering terrorism financing (ii) countering human trafficking and smuggling of migrants through capacity-building for law enforcement officials, prosecutors and judges applying Train the Trainers Methodology and victim-centered assistance strengthening the capacities of the civil society and (iii) HIV prevention in prisons through trainings, provision of Voluntary Counseling and Treatment (VCT) and vaccination campaigns in cooperation with the prison administration and civil society organizations.

In the near future, UNODC plans to increase its cooperation in Morocco in countering organized crime, in particular human trafficking, smuggling of migrants and related crimes such as money-laundering. Also, work in container control, AIRCOP and countering corruption will be strengthened.

During her recent visit to Morocco to open the workshop on the National Referral Mechanism, the UNODC Regional Representative for the Middle East and North Africa, Ms. Cristina Albertin held several high level meetings including with the Minister of Justice, the Delegated Minister in Charge of Relations with the Parliament and the Civil Society and the Inter-ministerial Delegate for Human Rights highlighting the priorities of the Government of Morocco for enhancing partnerships in countering terrorism with a focus on an appropriate criminal justice response for returning  foreign fighters, countering organized crime and human trafficking applying a victim-centered approach as well as expanding drug treatment with the support of civil society organizations. Comprehensive capacity-building in human rights as a cross-cutting issue in victim-centered approaches was identified as an indispensable element.

In her meeting with the Secretary General of the Prison Administration, two partnership agreements were signed aiming at (i) HIV prevention in prisons and (ii) vocational training for women prisoners in silver jewelry.   The meeting was followed by a visit to the largest prison of Africa in Casablanca where some 7,661 prisoners live, including more than 400 women inmates. During the visit, the UNODC Regional Representative for the MENA region could appreciate the comprehensive facilities in the prison, including separate wings for juveniles, adult men and women, for mothers with children, a creche as well as a diversity of training workshops in different skills, such as embroidery, baking, weaving, etc. The prison is equipped with a health clinic comprising of a variety of medical services, including a dental care clinic, dialysis service and HIV counselling and treatment provided for by civil society organizations and the Ministry of Health.

Ms. Albertin also met the UN Resident Coordinator, UNDP and Representatives from the EU and Germany.

UNODC ROMENA has a Programme Office in Morocco with four staff responsible for ongoing projects and activities, that are made possible thanks to the valuable contributions by the Drosos Foundation for HIV prevention, the Security capacity-building programs at Global Affairs Canada, EU for countering human trafficking and terrorism, and the US J/TIP Office to monitor and combat trafficking in persons.