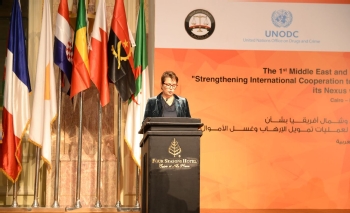 Terrorism continues to be a major threat to security within the MENA region posing a series of challenges to the criminal justice systems including the emerging threats of Foreign Terrorist Fighters (FTFs) and their expansion in the region.

In the framework of the recently signed Memorandum of Understanding (MoU) between UNODC and the Prosecutor General's Office of Egypt, the UNODC Regional Office for the Middle East and North Africa (ROMENA), the UNODC Office for the GCC countries and the UNODC Terrorism Prevention Branch (TPB) supported the Prosecutor General (PG) of Egypt in organizing the ' First Middle East and North Africa Conference to Counter the Evolving Threat of Financing of Terrorism and its Nexus with Money Laundering', bringing together Prosecutors General, Attorneys General and Public Prosecution Officials from 41 countries from MENA, Africa and Europe as well as international partners and donors.

26 Prosecutors General (PGs) participated highlighting the great importance attached by participating countries to the emerging terrorist financing threats, notably the funding of FTFs. The Conference focused on best practices and challenges in investigating the financing of terrorism and the connected money laundering operations; prevention and precautionary measures carried out by the prosecution authorities; cooperation between PGs and Financial Intelligence Units (FIUs), related international and regional instruments and ways to strengthen international cooperation in these areas.

In view of the importance of the topic of the Conference, the attending Prosecutors General were received by the President of Egypt to discuss enhanced cooperation in terrorism related cases, including terrorism funding and money-laundering.

In her opening speech, the UNODC Regional Representative for the Middle East and North Africa, Ms. Cristina Albertin, reminded the mandate of the Office in assisting Member States in the implementation of respective UN Conventions and international instruments  stressing that "to dismantle transnational organized crime groups and terrorism networks, we need to not only focus on the crime as such, but equally or if not even more importantly on associated crimes, in particular financial crimes, i.e money-laundering", and highlighted that "Terrorism financing often involves complex and informal networks of fundraising channels with strong transnational components which are difficult to trace and disrupt. Also, terrorist groups constantly seek to diversify and reengineer the sources of their funding as well as the channels and instruments to transfer them, including the use of the darknet and of most advanced technologies such as virtual currencies".

The Prosecutor General, Nabil Sadiq, stressed "the urgent necessity to support international cooperation and joint efforts among different countries of the world and exchange views and opinions to put an end to the financing of terrorism and money laundering", pointing out that " Egypt joined several international instruments on countering terrorism, and adopted a national strategy to combat terrorism that is based on providing training programmes for prosecutors".

The Representative of the EU Delegation in Cairo highlighted the importance of building partnerships and capacities in the region to respond to the merging terrorism threats.

The three-days Conference produced ten recommendations to strengthen the international cooperation in countering the different forms of emerging terrorism threats and related challenges.

UNODC acknowledges the contributions of the EU and Gulf Cooperation Council Countries projects for the Conference.