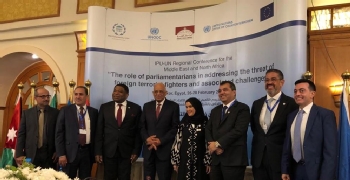 Parliamentarians from 16 countries in the Middle East and North Africa met in Egypt from 26 to 28 February at a high-level regional conference, co-organized by the United Nations Office on Drugs and Crime (UNODC), to discuss combatting terrorism and violent extremism.

The conference focused particularly on the threat posed by foreign terrorist fighters (FTFs). Around 40,000 such fighters from 110 countries are estimated to have travelled to join the conflicts in Iraq and Syria.

A recent report of the UN Secretary-General indicates that despite the military defeat of ISIL/Da'esh in Iraq and Syria, the group continues to represent a serious threat to international peace and security. This threat is exacerbated by foreign terrorist fighters who, after having gained experience in conflict zones, seek refuge in their countries of origin or travel to other nations. Even when detained, there is a risk that these prisoners will radicalize others.

Other factors that contribute to the complexity of the phenomenon include the return of women and children of the combatants as well as "frustrated travelers" who have failed to reach their desired conflict zone, have been redirected elsewhere by ISIL/Da'esh or are in transit locations.

The high-level event aimed to improve parliamentary cooperation and facilitate the exchange of relevant experiences and good practices regarding this phenomenon. It sought to get views from parliamentarians on the challenges in implementing United Nations resolutions, contribute to establishing a Global Parliamentary Network on Countering Terrorism and Violent Extremism, and raise the awareness of members of parliament with regards to the recent developments related to foreign terrorist fighters.

The conference, funded by the European Union, was operationalized under the framework of the five-year EU-UNODC Global Initiative on FTFs and was jointly organized by the Inter-Parliamentary Union (IPU), the House of Representatives of Egypt, UNODC and the United Nations Office on Counter Terrorism (UNOCT).

The event was part of the joint IPU-UNODC-UNOCT programme which seeks to support parliaments in implementing international counter-terrorism instruments and obligations. Furthermore, it also aimed to provide them with the necessary tools and training as guided by the IPU High-Level Advisory Group on Countering Terrorism and Violent Extremism.

UNODC is the key United Nations entity for the provision of legislative and capacity building assistance to Member States, upon request, for the ratification, legislative incorporation and implementation of the international legal instruments against terrorism.

The IPU has been working on the prevention of terrorism for several years. Since 1996, the IPU has adopted 12 resolutions related to terrorism which have emphasized cooperation with the United Nations. In its resolutions, the United Nations highlights the important role that parliaments play in ensuring that governments comply with international law.

Mandated by the United Nations General Assembly, UNOCT was established in June 2017 to provide leadership to the implementation of the General Assembly's counter-terrorism mandates to enhance coordination and coherence. Furthermore, it also aims to strengthen the delivery of the United Nations counter-terrorism capacity building assistance to Member States.

In response to the issue of foreign terrorist fighters, the United Nations Security Council adopted a number of resolutions, in particular 2178 (2014) and 2396 (2017) as well as the so-called "Madrid Guiding Principles" in 2015, a practical tool to assist Member States in stemming the flow of FTFs. Adopted in December 2018 by the Council, an "Addendum to the Madrid Guiding Principles" provides updated guidance for Member States to address the evolving threat posed by the FTF phenomenon, especially pertaining to their return, relocation and family members. UNOCT facilitates capacity-building assistance in the form of an "All-of-UN" approach to Member States through the    United Nations Capacity Building Implementation Plan for Countering the Flow of FTF, addressing the full life-cycle of the FTF phenomenon.

IPU-UN Regional Conference for the Middle East and North Africa: The role of parliamentarians in addressing the threat of foreign terrorist fighters and associated challenges