13 December 2016-  The first steering meeting for the implementation of CRIMJUST took place in UNODC Headquarters in Vienna. 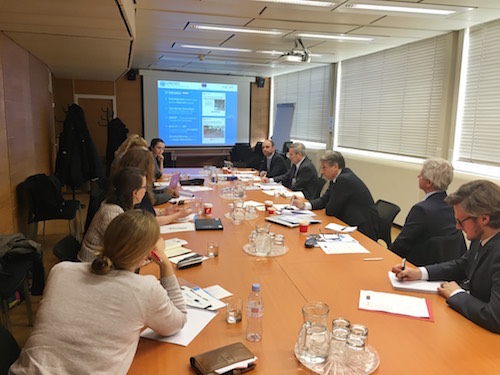 With the main goal of setting a strategic orientation for the project and review the implementation's progress, CRIMJUST Steering and Coordination Committee was held in UNODC Headquarters. On 13 December Representatives from the European Commission, EU Cocaine Route Programme (CRP) projects (SEACOP, AIRCOP and CORMS), INTERPOL,  Transparency International and UNODC thematic experts gathered to discuss and coordinate the further implementation of project CRIMJUST. The project, funded by the EU, was launched in mid of 2016 and aims at addressing the gaps to effectively countering drug trafficking and related organized crime along the cocaine routes from Latin America, the Caribbean to West Africa.

The meeting was opened by the European Union, Cocaine Route Programme Manager, Mr. Rui Costa, his opening  remarks stressed the importance of a comprehensive approach of CRIMJUST to bridge the gaps and complement the actions taken by the EU Cocaine Route Programme while reiterating the need to strengthen regional and interregional cooperation to tackle organize crime and drug trafficking.

During the meeting the focus was on the assessment of organized crime and cocaine trafficking in Latin America and West Africa, as well as to review the request of several Member States to join CRIMJUST.

CRIMJUST was recognized as a key element to tackle organized crime and illicit drug trafficking in the post-seizure phase, the project will work closely with the beneficiary countries in a joint effort to meet the needs of the regions. With the purpose of mitigating risks of duplication, synergy points for potential activities with AIRCOP and SEACOP were identified.

Participants reviewed and approved Project Communication and Visibility strategy and Work Plan for 2017. The meeting resulted in a number of recommendations to guide further implementation of the project.

Under the framework of the project CRIMJUST, the UNODC and its partners (INTERPOL and Transparency International) aim to assist Member States to enhance their capacity and integrity of criminal justice institutions to detect, investigate, prosecute and adjudicate illicit cocaine trafficking cases, to foster cooperation at the interregional level for effective action to tackle drug trafficking and related organized crime.