25 May 2017 - The UNODC's Global Programme Against Money Laundering, Global Programme against Cybercrime, Global e-learning Programme and CRIMJUST were brought together to share their expertise and knowledge on cryptocurrencies during the 26th Commission on Crime Prevention and Criminal Justice, which was held at the UNODC Headquarters in Vienna. 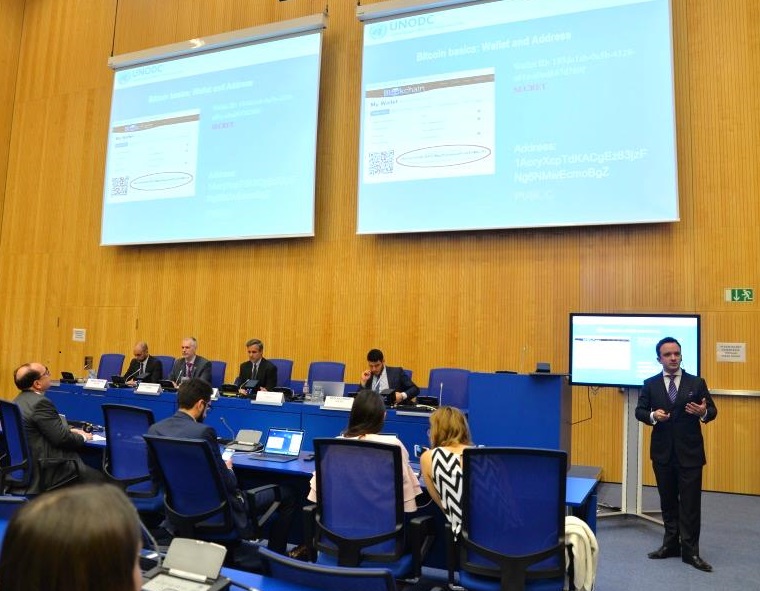 The European Union Serious and Organized Crime Threat Assessment (2017) stated that "Criminals continuously seek out methods and technologies to make their business models more effective and increase profit margins. The anonymous nature of online transactions in these marketplaces, and the use of cryptocurrencies reduces the risk of detection by law enforcement authorities for both vendors and buyers."

Mr. John BRANDOLINO, Director of Division for Treaty Affairs, opened the discussion by welcoming the cooperation of all programs to tackle this rising threat from every angle, from the education and introduction to cryptocurrencies, to the identification, investigation and prosecution of the criminals utilizing them. Mr. Neil WALSH, Senior Programme Manager of the Global Programme against Cybercrime gave a live demonstration of bitcoin investigation and Mr. Oleksiy FESHCHENKO, Programme Officer of the Global Programme Against Money laundering introduced the UNODC train-the-trainers program for bitcoin investigations. As the internet reduces the price for criminals and buyers, it presents a business model which is increasingly adopted by more criminals.

As Mr. Marco TEIXERIA, Programme Officer of CRIMJUST confirmed, according to the World Drug Report of 2016 "drug users have shown in increase in the purchase of drugs online''. After presenting CRIMJUST and the trainings it supported on cryptocurrencies in the framework of the Cocaine Route in Africa and Latin America; it was Mr. Nicolas CARUSO, Focal Point of the Global eLearning Programme who presented the eLearning Programme and its role within this topic.

Synergies between programmes were once again solicited and encouraged in the margins of this event, as cooperation remains a key element for ensuring a holistic approach to combat the threats posed by cryptocurrencies. Finding flaws, cracks and mistakes requires knowledge of cryptocurrencies and technology in general, in order to stay one step ahead of criminals.