UNODC in Latin America and the Caribbean: A presentation of CRIMJUST during the 26th Meeting of HONLAC

04 October 2016 - CRIMJUST is presented as a regional initiative to combat trafficking during the 26 th Meeting of Heads of National Drug Law Enforcement Agencies,  Latin America and the Caribbean 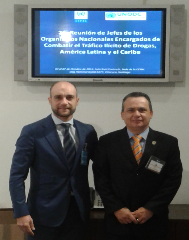 UNODC gave a presentation regarding CRIMJUST  during the 26th meeting of the Heads of National Drug Law Enforcement Agencies (HONLEA), Latin America and the Caribbean which was held at the Economic Commission for Latin America and the Caribbean (ECLAC) in Santiago de Chile, from 3 to 7 October 2016.  Attendees included more than 80 participants from 25 States members, among them, Chiefs of anti-narcotics police and other drug control authorities. Participants held substantive discussions on the current situation with respect to regional cooperation, trends in drug trafficking, effective countermeasures and technical assistance.

Under the working group for regional and international initiatives to combat trafficking,  a thematic project presentation regarding CRIMJUST was given by Marco Teixeira, Programme Officer. The presentation included explanation of why UNODC is engaged in the region and the type of activities CRIMJUST undertakes. The main objective of the project was highlighted, with the implementation of CRIMJUST, technical assistance is aimed at reinforcing inter-agency collaboration to strengthen the security and justice sectors by investigating and prosecuting complex cases, and reducing judicial delays and ineffective enforcement of justice along the cocaine route.

In the margin of the meeting, contacts were held with Panama's nominated focal point for CRIMJUST. Recommendations adopted by the 26th HONLAC, Latin America and the Caribbean meeting will be brought to the attention of the Commission on Narcotic Drugs at its next session in 2017.

Under the framework of the project CRIMJUST, the UNODC and its partners (INTERPOL and Transparency International) aim to assist Member States to enhance their capacity and integrity of criminal justice institutions to detect, investigate, prosecute and adjudicate illicit cocaine trafficking cases, to foster cooperation at the interregional level for effective action to tackle drug trafficking and related organized crime.