On 15 - 16 July 2009, the Ministry of Justice and Human Rights in collaboration with UNODC hosted a workshop in Abidjan, Côte d'Ivoire, to discuss a draft law aimed at preventing migrant smuggling.

Smuggled migrants are vulnerable to life-threatening risks and exploitation. Every year, several thousands of people lose their lives by suffocating in containers, perishing in deserts of dehydrating at sea. Generating huge profits for the criminals involved, the smuggling of migrants contributes to the fueling of corruption and empowers organized crime.  The phenomenon of migrant smuggling in West Africa has been explored in a new UNODC Report, Transnational Trafficking and the Rule of Law in Africa: A Threat Assessment.

Criminal groups and corrupt practices are the target of this new draft law, submitted to the Government for subsequent adoption by the National Assembly of Cote d'Ivoire. The elaboration of the draft law has been supported by the Impact Programme. The Impact Programme aims to support states in North and West Africa to strengthen legislative frameworks, build capacity of law enforcement, prosecution and the judiciary, and strengthen international and regional cooperation against migrant smuggling. It was in this context that the expert meeting on the draft law was held.

Participants at the meeting - including Mr. Palé Dimate, Chairman of the Committee on Social and Cultural Affairs in the National Assembly - highlighted the need for ECOWAS Member States who have not yet done so, to commit to the UN Migrant Smuggling Protocol as a matter of priority. Chief of Staff of the Minister of Justice and Human Rights Mr. Yéo Ali, stressed that institutional lacunae allow illegal activities to thrive and organized criminal networks to flourish without risk of prosecution.

In this respect, UNODC Project Coordinator Mr Macario Perdigao stressed the urgent need to develop appropriate legislative and institutional frameworks to tackle migrant smuggling in the region to give practical meaning to the UN Migrant Smuggling Protocol. Spanish Ambassador Ms. Cristina Diaz confirmed Spain's commitment to work alongside UNODC in support ECOWAS Member States in their fight against migrant smuggling, in which this draft law of Côte d'Ivoire represents a major triumph. 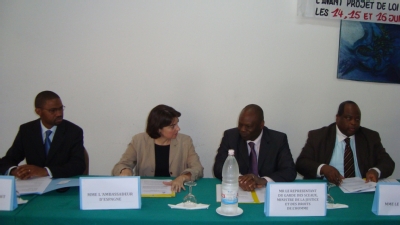 Transnational Trafficking and the Rule of Law in Africa: A Threat Assessment